DNA Sequence for cloning may be obtained by two ways: using mRNA and Separation of DNA sequence from the genome of the cell, where the cells are broken up and the entire genome is cleaved by the restriction endonuclease enzymes, A mammalian genome that is treated in this way may produce millions of DNA fragments, These DNA fragments are spliced into plasmids or phases and cloned.

It is the best way that takes place, as follows:

The reverse transcriptase enzyme is produced by viruses containing RNA genomes as they use it to convert their own RNA genomes into DNA that can be joined to the host’s DNA genome to ensure their replication.

Ways of cloning DNA sequences (clone a gene or a part of DNA by two ways): 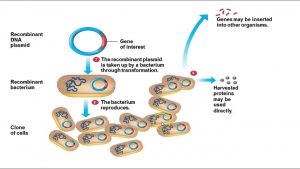 Using the plasmids or phages

The polymerase chain reaction (PCR) is capable of replicating many thousands of copies of DNA in a few minutes by using the “Taq polymerase enzyme” which works at high temperatures and this technique is used nowadays.

Recombination DNA is the introduction of a part of DNA from one organism into cells of another organism, Some scientists imagined a time when we will be able to introduce copies of normal genes into human being whose genes are defective, thereby preventing much suffering and eliminating the need for the treatment of the genetic deficiencies by the medicines.

The production of useful proteins on a commercial scale:

The agricultural researchers will probably soon be able to:

In experiments and researches

Researchers were able to:

Although recombinant DNA is important in many fields, many people are worried about what will happen, if there is a sudden accident (it has many dangers), Because it is supposed that a strain of bacteria with a gene of a dangerous toxin would be let loose in the world, Many workers feel that the chance of this happening is slight.

Although the bacterial strains used in many recombinant DNA experiments are Escherichia coli which is a species universally found in the human intestine, the actual strains used in the laboratory have been out of contact with the real bodies for thousands of generations, They have evolved in such a way that they can no longer survive outside their test tube homes.

In 1953, Watson and Crick proved that the genes are double helix of DNA, In 1980, the idea of the genome appeared and the number of human genes that were identified by the scientists was about 450 genes.

In the middle of eighties, the number of human genes was doubled three times to be 1500 genes, Some of these genes were the causative of the increase of cholesterol in the blood (one of the causes of the heart disease) and some of them are causing cancer disease.

Scientists discovered that there is about “60,000: 80,000” genes in the human body which exist in 23 pairs of chromosomes and the complete set of genes are known as “human genome”, where only half of these genes are discovered till now.

Examples of genes which their location was determined on the chromosomes in the human:

The uses of the human genome