DNA molecule composition and the functions of genes

What are the gens?

The cell nucleus contains a number of chromosomes, and each chromosome consists of two chromatids, Each chromatid chemically consists of proteins and DNA ( a nucleic acid ) which carries the hereditary traits of the living organism.

The gene is the building block of nucleic acid (DNA), The gene consists of more smaller blocks ( consecutive units ) called nucleotides, Each nucleotide consists of three components which are a phosphate group , a deoxyribose sugar ( 5 – carbon sugar ) and a nitrogenous base.

There are four types of nitrogenous bases like Adenine ( A ) , Thymine ( T ) , Cytosine ( C ) , and Guanine ( G ) ,  Scientists Watson and Creek were able to make a model of the DNA molecule. 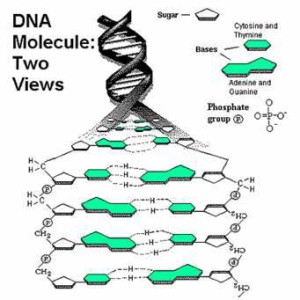 DNA molecule is composed of two strands coiled around each other like the spiral ladder called the double helix, where the sides of this consist of sugar molecules ( Deoxyribose sugar ) and phosphate groups, Its steps consist of groups of the nitrogenous bases, where, The adenine pairs with Thymine ( A = T ) , The Guanine pairs with Cytosine ( G ≡ C ) .

How do you inherit your genes ?

The individual inherits half of his genes from the father , and the the other half from the mother and  as follows :

How do the genes perform their functions ?

Badel and Tatum the scientists ( who took Nobel prize in the year 1958 ) discovered the means of how the genes controls the appearance of a trait , where they found that every gene gives a special enzyme .

The function of genes

The genes control the body growth , the features and the functions , They are responsible for the hereditary traits appearance as the hair colour , the eye colour , ………… and so on .

The inheritance of the trait of eye colour