Reproduction in flowering plants, Structure & functions of the flower

The flowering plants are a large group of seed plants that called Angiospermae, as their seeds develop within a pericarp, They are common in various habitats and vary in the size from small herbs to giant trees, The flowering plants reproduce by a specialized organ which called the flower.

The flower is the reproductive organ in the flowering plants and it is a short stem whose leaves are modified to form the various floral parts, Bract is a leaf that from its axil the flower emerges, It varies in the shape and colour from a plant to another ( scale, green ……… ).

The flower may be:

Origin of the flowers 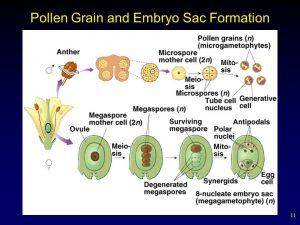 Structure of the flower

The typical or complete flowers (hermaphrodite) such as in bean, apple, onion & Petunia has four floral whorls, where the leaves of each whorl alternate with those of the next whorl as follows:

Calyx (outer whorl of the flower) consists of green leaves that called sepals, It protects the inner parts of the flower against drought or rain or wind.

Corolla (follows the calyx from inside) consists of one row or more of coloured leaves that called petals, It protects the floral sexual parts, It attracts insects for the occurrence of the pollination process.

Androecium (flower male organ) consists of numerous leaves that called stamens, where each one of them consists of filament that carries an apical anther, anther contains four sacs of pollen grains, It produces the pollen grains (male gametes).

Gynoecium (flower female organ and lies in its centre) produces the ovules (female gamete), It consists of one carpel or more that may fuse or remain separated, where each one of them consists of:

In the flowers of most monocotyledon plants as tulip and onion, the leaves of the calyx are difficult to be differentiated from those of the corolla, and so the two outer whorls are called perianth.

Functions of the flower

The flower performs its functions in reproduction for the species continuity and this requires the following:

If you examine a T.S. in a mature anther of a large-sized stamen as in the lily plant, you find that the anther consists of four sacs of pollen grains where the pollen grains are formed as the following:

During the formation of pollen grains in the anther, parallel changes occur in the ovary as the following:

The ovule starts to appear as a simple swelling on the interior wall of the ovary and it contains a large mother spore cell (2n).

The mother spore cell (2n) divides inside the ovule meiotically, giving a row of four haploid cells (n), Three of these cells degenerate and the fourth remains and grows rapidly, forming the embryonic sac which is surrounded by a nutritive tissue called the nucellus, Inside the embryonic sac, many stages occur as follows:

The ovule becomes ready for fertilization.