As well as in the features of life ( nutrition , excretion , respiration , reproduction , movement , sensation and growth ) , They differ in many other characteristics such as shape , structure , way of living , nutrition and reproduction .

There are millions of insects , small animals and plants that live in oceans which are not yet discovered till now , Due to the enormous diversity in living organisms , the need for classification process appeared .

The modern classification system depends on the definition of the species as a scientific and basic principle in classifying living organisms . 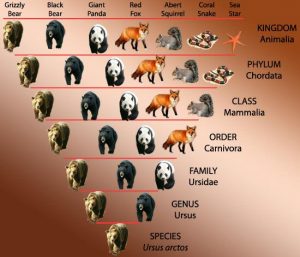 It is a group of individuals having similar morphological characteristics , mate with each other and produce fertile offspring similar to them .

There are individuals that do not give the term species because they are sterile ( infertile ) individuals, they are unable to mate and produce a new generation of the same kind, such as Tigon and Mute .

A need appeared among scientists to name living organisms with unified scientific names , where the same organism has many names that differ in various earth’s regions and environment and these names are known as common names .

To overcome this problem , The scientist Carolus Linnaeus developed a system for naming organisms and gave it the name of binomial nomenclature system .

There are seven levels ( or groups ) for classifying living organisms , Each group comprises less numbers of organisms , that have more similar characteristics , than the group preceding it .

There are other groups that intermediate each two successive groups , such as sub-phylum and sun-class .

Ways of its designing

An example : shows a bilateral dichotomous key for five species of insects .

Insects are wingless ( ants ) and winged , Winged insects contain one pair of wings and two pairs of wings .