Attempts of classification of living organisms :

The Latin philosopher: Aristotle ( more than 2300 years ago ), He was the first who classified animals into red-blooded animals and bloodless animals , Plants into trees, shrubs and weeds.

The scientist : Carolus Linnaeus ( 1700 ) , He established the traditional classification system that classified living organisms into two kingdoms only , which are animal kingdom and plant kingdom .

The scientist: Robert Whittaker ( 1969 ), He established the modern system of classification where living organisms were classified into five kingdoms, where are Monera, Protista, Fungi , Plantae , Animalia , This system is the conventional system in the scientific communities.

There are some organisms that are difficult to classify according to Whittaker classification , They are viruses , viroids and prions . 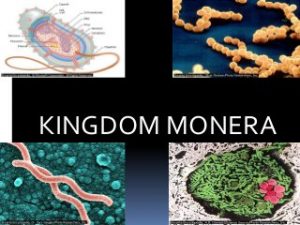 It may live individually or in colonies , Its body consists of one cell ( unicellular organisms ) , It is prokaryotic , It does not surrounded by a definite nucleus and the genetic material is found in cytoplasm and not surrounded by a nuclear membrane .

It is devoid from cellulose or pectin , Cytoplasm is lack of many membranous organelles such as : mitochondria , plastids , Golgi apparatus and endoplasmic reticulum , Kingdom Monera is classified into two different groups , which are Archaebacteria and Eubacteria .

Most of them survive in harsh environmental conditions, such as Hot springs, Environment with no oxygen and High salty water , They differ from Eubacteria in structure of both cell membrane and cell wall .

They live everywhere and in all earth’s environment , such as Air , Land and Water , Some are autotrophic such as Cyanobacteria , such as Nostoc and others are heterotrophic , Reproduction is asexually by binary fission , They have several shapes ( forms , such as Spherical-shaped , Rod-shaped and Spiral-shaped .

Bacteria are classified in a separate kingdom ( Monera ) because they are characterized by the following characteristics : They are unicellular organisms , They have a cell wall and their genetic material is not surrounded by a nuclear envelope ( nuclear membrane ) .

They are very tiny bacteria , their size is about 20 : 2oo nanometers , Scientists disagree in considering them as crystalline structures or a new form of life , They grow slowly inside the living cell .

Their shape changes during their stages of growth , They are more resistant than the normal bacteria where they can protect themselves from the defence system of the body by secreting stone shields surrounding them as a capsule .

Researchers arrived to that this kind of bacteria is a main cause in the formation of kidney stones , atherosclerosis and inflammation of the prostate .

They are eukaryotic organisms , Their structure is not complex as plants and animals , Some of them have cell walls and plastids , Most of them are unicellular and the little are multicellular , Kingdom protista is classified into four phyla which are Phylum Protozoa , Phylum Euglenophyta , Phylum Chrysophyta and phylum Pyrrophyta .

Some are free living , individually or in colonies , in fresh and salt water , as well in moist soils , Others parasitize plants and animals causing diseases , They are unicellular and microscopic animal-like organisms , They reproduce sexually and asexually , Protozoa is classified into four classes depending on the mean of locomotion which are :

Mean of locomotion : Pseudopodia ( Temporary extensions from the body ) such as Amoeba .

Mean of locomotion : Cilia ( surrounding the body ) , such as Paramecium .

( They produce phases called spores ) , They have no mean of locomotion , They parasitize the human and infects him with malaria disease .

It is one of widespread diseases in the tropical regions , It is caused by Trypanosoma parasite that is transmitted by tsetse fly , when it bites a human , Its symptoms include fever , heavy sweat , headache , hallucination , weakness and tendency to sleep , Without treating the patient in the proper time , he goes into coma which leads to death .

They are unicellular organisms , Cytoplasm contains chloroplasts which perform photosynthesis , They move by flagella , Example : Euglena .

Most of them are unicellular and called diatoms , They are characterized by : They have glass-like walls containing silica , They are considered as an important source of food for fish and other marine animals .

They live in seas and oceans , where they form a great portion of phytoplanktons , They contain a red pigment , acquiring them a red colour beside the chlorophyll pigment , Example : Dinoflagellates that represent the largest group of phylum pyrrophyta and they move by two flagella .

It is a natural phenomenon occurs in water of seas and oceans where water is colored red and this is accompanied with the death of thousands of fishes.

The cause of this phenomenon is attributed to the enormous increase in numbers of dinoflagellates when water becomes warm with a plenty of nutrients, There organisms reproduce very rapidly and secrete toxins kill fishes.