The cell is the smallest functional and building unit in all living organisms , The cell is characterized by the ability to  grow , It can reproduce , It can respond to the external stimuli and perform the different metabolic processes .

The cell is made up of a protoplasmic mass surrounded by the cell membrane , The protoplasm is differentiated into parts which are nucleus and cytoplasm , Cytoplasm contains a group of cellular structures called cell organelles . 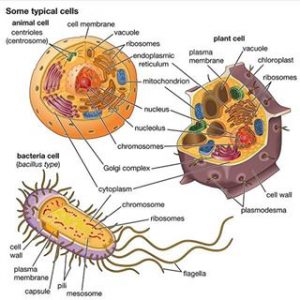 Parts of the cells

The cell wall surrounds the plant cell, algae, fungi and some types of bacteria, It is mainly composed of cellulose fibres, It supports and protects the cell, It allows the passage of water and dissolved substances through it easily because it is pitted.

The perennial trees such as palm trees are characterized by containing cell wall that play an important role in protecting the cells , making them withstand to wind and other weather factors , these walls provide the cells with strong support .

The small herbal plants are characterized by containing cell walls with little elasticity that makes them able to maintain their shapes as they are exposed to strong wind.

It surrounds the cytoplasm of plant and animal cells , Cell membrane is a fluid structure similar to a layer of oil because the phospholipids forming it are a fluid substance , It is a thin membrane consisting of :

Cell membrane functions: It covers the cell and separates its components from the surrounding medium , So , it prevents the spreading out of cytoplasm outside the cell, It performs a basic role in organizing the passage of the substance to and from the cell .

Nucleus is the most obvious organelle in the cell that can be seen under the microscope ,  It has a spherical or oval shape and it is located at the middle of the cell .

The nucleus is composed of :

Chromosomes were called with this name because they stain by basic dyes , So, they appear coloured making them more clearly seen during cell division, During metaphase of cell division , The chromosome appears consisting of two filaments , each filament of those is called chromatid , They are joined together by a central part called centromere .

Each chromatid is composed of the nucleic acid DNA coiled around protein molecules called histones, DNA carries the genetic information ( genes ) that  control the shape and structure of the cell and organize its vital activities , Genetic traits are transferred through them from a generation to another by reproduction .

Chromosome becomes consisting of one chromatid in anaphase , telophase and called daughter chromosome , At the beginning of each new cellular division , its genetic material is duplicated to become consisted of two chromatids .

You can read this article about the cytoplasm