There are many different mechanisms by which microorganisms might exhibit resistance to drugs:

2. Microorganisms reduce their permeability to the drug. In resistant cells, the drug is either not actively transported into the cell or leaves it so rapidly (by efflux pump) that inhibitory concentrations are not maintained. Examples include tetracyclines, aminoglycosides, and polymyxins.

4. Microorganisms develop an altered metabolic pathway that bypasses the reaction inhibited by the drug, e.g., some sulphonamide-resistant bacteria do not require extracellular PABA but, like mammalian cells, can utilize preformed folic acid. 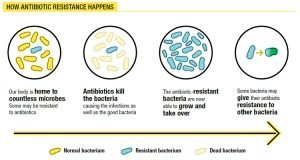 1. Non-genetic origin (natural or inherent): This is an innate property of the bacterium, so it is predictable. It is often due to the absence of a target structure for drug action (e.g absence of a cell wall in Mycoplasma). It may also be due to the presence of a permeability barrier in the cell envelope (e.g. Pseudomonas aeruginosa has a complex cell wall that limits penetration of many antibacterial agents). Also, microorganisms that are metabolically inactive (non-multiplying) may be resistant to drugs e.g. mycobacteria often survive in tissues for many years after infection and do not multiply.

Chromosomal resistance: which develops as a result of spontaneous mutation in a locus that controls susceptibility to a given antimicrobial drug. Spontaneous mutation occurs with a frequency of 10-8 to 10-12 and thus is an infrequent cause of the emergence of clinical drug resistance in a given patient. Chromosomal mutations are most commonly resistant by virtue of a change in a structural receptor for a drug or an alteration of a metabolic pathway.

Extrachromosomal resistance: Carried on plasmid or transposon genes. These genes often control the formation of enzymes capable of destroying antimicrobial drugs. Thus, plasmids that determine resistance to penicillins and cephalosporins carry genes for the production of ß-lactamases. Plasmids that carry resistance to chloramphenicol code for enzymes that destroy it (acetyltransferase).

Plasmids can also code for enzymes that acetylate, adenylate, or phosphorylate various aminoglycosides Other resistance genes that may be carried on extrachromosomal elements include genes that code for enzymes that determine the active transport of antibiotics e.g. tetracyclines across the cell membrane (reducing the import and or increasing the export of the drug).

Cross Resistance: Microorganisms resistant to a certain drug may also be resistant to other drugs that share a mechanism of action. Such a relationship exists mainly between agents that are closely related chemically (e.g. polymyxin B and polymyxin E (colistin]. erythromycin and oleandomycin neomycin and kanamycin).

The emergence of drug resistance in infections may be minimized in the following ways: