Importance of excretion in animals

Excretion is the process by which the living organisms get rid of waste products that are produced from the biological processes , The excretion refers only to the materials that leave the body through the plasma membranes. 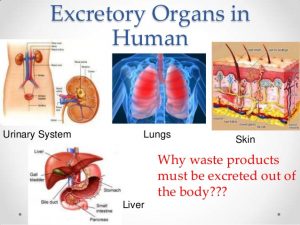 There are some materials that are not considered as excretory products as :

Functions of the excretory organs in higher animals :

The important excretory organs in man’s body are : skin , lungs , kidneys and liver , The important waste products of human body and the organs that are responsible for their excretion .

Skin is the biggest organ in the body , as it covers the whole body and the limbs from the outside , The skin consists of two main layers which are an outer epidermis & an inner dermis , It adheres to the body by a layer of fat present under the dermis , Epidermis consists of several layers of epithelial cells .

The inner layer makes a continuous replacement of the surface layer , Its base contains pigment cells which secrete granules called melanin that are responsible for the colour of skin , The epidermal layer of skin acts as a barrier that prevents the penetration of bacteria .

The functional unit of excretion in skin , It is a coiled tube that reaches the skin surface through pores called sweat pores , Its function for extraction of sweat :

Hair is made of a hair follicle surrounded by many blood capillaries , The hair follicle is supplied with an erector muscle to move it when it contracts , At its free end , there is a sebaceous ( fat ) gland which produces an oily secretion to facilitate the exit of hair from the skin and to keep the hair soft and pliable , Sensory nerve endings respond to touch , pain , pressure and temperature .

Each vertebrate animal has two kidneys , In lower vertebrates ( as amphibians ) such as frog : the kidneys are long and thin organs which extend on the two sides of vertebral column .

In higher vertebrates ( as mammals ) : The kidneys are more firm and situated behind the peritoneum ( membrane that lines the abdominal cavity ) , a tube called the ureter runs from each kidney to the base of bladder , through which urine is collected and passed to the outside through the urethra .

Kidney in the human body

The two kidneys are situated in the upper part of abdominal cavity , one at each side of the vertebral column , The length of each kidney is about 12 cm long and about 7 cm wide , while its thickness is about 3 cm .

The kidney is bean-shaped , its outer part is convex , while the inner one is concave , On the inner side of each kidney , the renal artery comes from the aorta , and the renal vein leads to the posterior vena cava .

The kidney is differential internally into two regions which are the cortex ( an outer narrow region of kidney ) and the medulla ( an inner broad region of kidney ) , The inner concave part ( cavity ) of kidney from which the ureter is emerged , is called pelvis .

It is the functional unit of kidney , Each kidney consists of about one million nephrons , The structure of nephron :

The nephric tubules are collected to form the collecting duct that opens in the concave cavity of the kidney which is called pelvis .

Re-absorption is a biological process in which the body re-absorbs the required water , glucose and mineral substances to be back into the blood and the wastes leave the body in the form of urine .

The kidney does not exit all the fluid extracted from Bowman’s capsule as the body will lose much of its required water and essential substances and the individual has to drink daily 170 liters of water to compensate its loss .

This means that a very high percentage of blood always passes through the kidney , From the total blood volume , three liters of plasma pass through the two kidneys to be examined about 560 times per day .

The individual can live with one kidney , in this case , this kidney grows and becomes slightly bigger to perform the function of two kidneys , but if two kidneys stop functioning , this will lead to the accumulation of poisonous wastes in the blood that leads to the death .

Kidney failure takes place due to some diseases , The kidneys stop functioning and this leads to the accumulation of harmful wastes in the blood , So , the blood must be purified by the artificial kidney that works as the following :

In addition to the function of liver in digestion and metabolism , liver has a role in the excretion process , because :

Urea is an excretory poisonous substance that is formed by the liver through separating the amino groups from the excess amino acids and expelled through the kidneys outside the body , Urea poisoning is the accumulation of excretory substances in the blood of man , due to the stop functioning of kidneys ( kidney failure ) .