Structure of the nervous system

As previously mentioned the central nervous system is divided into brain and spinal cord . 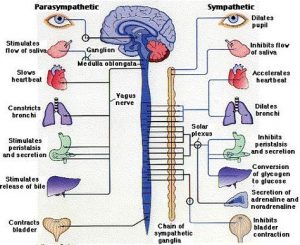 It is the major part of central nervous system and its weight is about : 350 grams at birth , 1400 grams in an adult man , It occupies a bony space called the brain case or the skull ( cranium ) , It is surrounded by three membranes called the meningies which are responsible for the protection and nutrition of brain cells , 12 pairs of cranial nerves are connected to the brain .

The structure and function of each part of the brain :

It represents the largest part of brain , It consists of two cerebral hemispheres and cerebral cortex ,Thalamus , Hypothalamus .

Two big lobes separated by a big fissure and attached to each other by a big bundle of nerve fibers , Each lobe is called cerebral hemisphere , The cortex of each lobe ( cerebral cortex ) is characterized by the presence of depressions of different depths called fissures and grooves and in between there are folds .

Each cerebral hemisphere is divided into many lobes , which are frontal lobe , parietal lobe , occipital lobe & temporal lobe , The 5th lobe of cerebral cortex can not be seen by the naked eye as it is covered by the fronted and partial lobes .

It is an important centre for the coordination of different sensations ( except the smell ) that reach the cortex .

It is the smallest part of brain , It represents a connection between the forebrain and hindbrain , It contains centers of Equilibrium ( keeping the body balance ) , Hearing and Vision , It regulates many reflexes as those related to the hearing .

It consists of Cerebellum , Pons Varolii and medulla oblongata , Cerebellum is situated in the posterior region and consists of three lobes , It keeps the balance and equilibrium of the body in association with the inner ear and muscles .

It exists inside a canal in the vertebral column called the neutral canal , It extends from the medulla oblongata in the form of cylindrical cord , Its length is about 45 cm long , It is hollow from the inside due to containing a central canal .

There are two fissures ( dorsal and ventral ) extend along the midline which divide the spinal cord incompletely into two halves , It is covered by three membranes ( meningies ) , which are Dura mater , Pia mater & Arachnoid .

Structure of the spinal cord

It consists of two layers :

It connects the central nervous system with all parts of the body , It consists of a network of nerves distributed all over the body , which includes Cranial nerves and Spinal nerves .

Mixed nerves are nerves carry the impulses from the receptors to the brain and from the brain to the effector organs , so , they are sensory and motor nerves together .

Number : 31 pairs connected to the spinal cord and they are mixed nerves with both sensory and motor fibers , Spinal nerves are divided into :

Types : all spinal nerves are mixed ( sensory and motor nerves ) , Each spinal nerve originates from the spinal cord by two roots ( dorsal and ventral ) .

Dorsal root carries sensory nerve fibers , It transmits the impulses from the receptors to the spinal cord , then to the brain .

Ventral root carries motor nerve fibers , It transmits the impulses from the brain and spinal cord to the responding ( effector ) organs as muscles and glands .

Reflex arc is the unit of nervous activity , The majority of nervous functions can be analyzed to a group of reflex actions , The reflex action consists of at least two nerve cells :

The majority of reflex actions of five elements :

The nerve fibers of this system are arisen from the thoracic and lumbar regions of the spinal cord , This system is important as an emergency system , as it enables the body to confront the emergency situations .

The nerve fibers of this system are arisen from the brain stem and sacral region of the spinal cord .

Adrenal medulla : Sympathetic system stimulates the secretion of a adrenaline hormone ( epinephrine ) which increases the blood pressure , heart rate and the glucose level of blood , there is no parasympathetic fibers connection.