Fertilization is the fusion of the male gamete (sperm) with the female gamete (ovum) to form the zygote which divides to form the embryo, The man may be considered infertile, if the number of sperms is less than 20 million sperm per ejaculation, because many of them are lost during their journey to the ovum and the dissolve of a part of the ovum coat which is intact by hyaluronic acid requires the presence of a large number of sperms.

The ovum is released in the 14th day from the beginning of menstruation and it is ready for fertilization within 1-2 days, Fertilization takes place in the anterior third part of the Fallopian tube, The number of sperms ranges between 300-500 million sperm per ejaculation, where many of them are lost during their journey to the ovum, The sperms can stay alive about 2-3 days inside the female genital system.

All the sperms participate together in secreting the hyaluronidase enzyme which dissolves a part of the ovum coat that is intact by the hyaluronic acid, One sperm only enters into the ovum by its head and neck, leaving the midpiece and tail outside, After the fertilization process, the ovum surrounds itself with a coat that prevents the entrance of any other sperms. 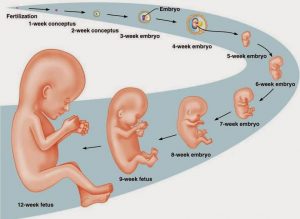 After one day from fertilization: The zygote divides by mitotic division into two cells (two blastomeres) at the beginning of the Fallopian tube.

After two days from fertilization: The two cells are multiplied to four cells, The cellular division is replaced, forming a mass of small cells known as the morula which is pushed along the Fallopian tube by the action of cilia, till it reaches the uterus.

The endometrium is characterized by a blood supply that is necessary for the development of embryo along the nine months of pregnancy, In the uterus, The morula is implanted among the folds of the thick-walled uterus (the endometrium) at the end of the first week.

There are finger-like projections grow from the chorion membrane that are inserted in the endometrium and in which the blood capillaries of both the embryo and mother touch each other, They intermingled, forming the placenta.

The importance of the placenta

The placenta transfers the drugs and harmful substances such as the alcohol, nicotine & viruses from the mother’s blood to the embryo which causes acute harms, serious deformities and diseases to the embryo.

The embryo is connected with the placenta by a tissue that is rich with blood capillaries called the umbilical cord whose length is about 70 cm to allow the embryo to move freely.

The importance of umbilical cord

The stages of embryonic development

The period of embryonic development is divided into three stages which are as follows:

It includes the middle three months of pregnancy, where: the development of the heart is completed and its beats can be heard, Ossification of the skeletal system takes place, The sense organs are completed, The growth of the embryo in size increases.