Therefore, Morgan considered the eye color characteristic is a sex-linked characteristic where its genes are carried on the sex chromosomes ( X), where the sex-chromosome ( Y ) carries few genes of them only. 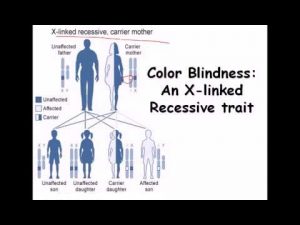 In humans , the chromosome ( X ) carries genes responsible for somebody characteristics, Such as Colour blindness , Haemophilia , Short-sightedness and Muscle atrophy .

Sex chromosome ( Y ) in male human carries some genes without the presence of corresponding genes to them on the sex chromosome ( X), such as the gene responsible for the appearance of hair on ear margins, So, these traits are restricted only to males .

The  case of colour blindness is caused by a recessive gene carried on the sec chromosome ( X ) , this gene causes the inability to distinguish the colours especially the red and green colours .

Colour blindness is genetic case cause the inability of distinguishing the colours especially the red and green ones .

The case of haemophilia is caused by a recessive gene carried on the chromosome ( X ) , This gene causes a liquidity in blood due to lack of some substances necessary for blood clotting , Haemophilia disease may cause death especially in childhood stage .

Haemophilia is genetic case causes blood liquidity due to the lack of some substances necessary for blood clotting .

The case of muscle atrophy is caused by a sex-linked lethal gene carried on the chromosome ( X ), It is restricted only on males and its symptoms appear at the age of twelve years where it causes gradual atrophy of muscles, It ends by death.

The sex-linked characteristics ( in Drosophila or human ) , In males : They are represented by one gene only because the chromosome ( Y ) does not carry sex-linked genes .

In females: They represented by a pair of genes because female cells contain a pair of sex chromosomes ( XX ), So, Sex-linked characteristics are more popular among males than females .

Sex-influenced traits , Sex-limited traits and Medical examination before the marriage