The centromeres help to keep the chromosomes properly aligned during the complex process of the cell division, As the chromosomes are copied in the preparation for the production of a new cell, The centromere serves as an attachment site for the two halves of each replicated chromosome, known as sister chromatids.

The DNA molecule is packaged into thread-like structures called the chromosomes in the nucleus of each cell, Each chromosome is made up of DNA tightly coiled many times around the proteins called the histones that support its structure. 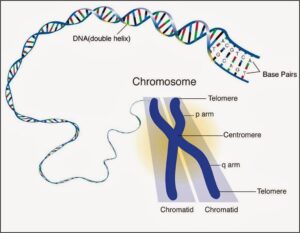 The cell nucleus is responsible for the cell division because it contains the genetic material of the living organisms which consists of a number of chromosomes that have the main role in the cell division.