Tissue can be used to diagnose & classify diseases, Tissues can identify that the patient has cancer, what kind of cancer (e.g., kidney, prostate), and the characteristics of cancer (e.g., Stage II, grade or subtype of lung cancer), Tissue can be used to monitor responses to treatments to determine if cancer is progressing or responding or what side effects of treatment are occurring.

The tissue is a group of cells or fluid that can perform a specific job in the body such as cells in an organ like the kidney or heart or blood cells that carry oxygen to and waste materials from the cells in the body, The basic tissue is a group of similar cells specialized to perform a common function, these tissues do not exist as isolated units but rather in associations forming body organs and systems. The human body is composed of only 4 basic tissue types:

The epithelium is a tissue that covers the body surfaces, lines body cavities, and forms glands. 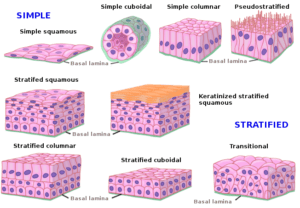 The epithelium is classified according to its structure and function into:

Epithelial cells are classified according to:
A. The number of layers:

B. The shape of cells:

Sites: It is characteristically thin to allow material transport across it.

2- Simple cuboidal epithelium is composed of one layer of cubical cells with central rounded nuclei. It is relatively thick compared to the squamous variety.

Sites: It is present in areas where ion exchange is required.

3- Simple columnar epithelium is made up of a single layer of tall columnar cells, The nuclei are ovoid and close to the base of the cell, It has 2 types:

4- pseudostratified columnar epithelium: This type is essentially simple, composed of only one layer but it has a false appearance of stratified epithelium, it consists of crowded columnar cells so that all cells lie in contact with the basement membrane but they do not all reach the surface.

1- Stratified squamous epithelium: The most superficial cells are flat squamous, this type of epithelium is either keratinized or non-keratinized.

3- Stratified columnar epithelium: The superficial cells are columnar, It is also an uncommon type of epithelium.

4- Transitional epithelium: This type of epithelium varies greatly in appearance i.e. it can change its shape and number of layers, according to the functional state of the organ.

Sites: lining the urinary passages; the ureter and the urinary bladder, In these sites, the lumen is subjected to volume changes due to emptying and distension, in the empty condition, the epithelium consists of several layers:

In the full (distended) condition, the epithelial cells glide on each other and become formed of only two layers:

This type of epithelium is formed of secretory cells that produce Secretion, which sometimes stored as secretory granules. Glands arise from the covering epithelium which proliferates into the underlying connective tissue, glandular epithelium can be classified according to various criteria:

1- According to the number of cells:

2- According to the presence or absence of a duct system:

3- According to the mode of secretion (the secretory mechanism):

4- According to the nature of secretion:

5- According to the shape of the secretory portion:

A. Neuroepithelium: the epithelial cells differentiate to act as nerve receptors.
Sites:

B. Germinal epithelium: specialized type of epithelium carrying the function of the reproduction and produce germ cells, It is present in the testis and ovary.

C. Myoepithelial cells: they are modified stellate epithelial cells that surround the secretory units (the acini) and the ducts of the glands, they contain myosin and actin myofilaments; hence, they are able to contract and squeeze the secretion from the glands.
Sites: