Pyrimidine bases are formed of heterocyclic rings containing nitrogen, so they are called nitrogenous bases. In humans, there are 3 major pyrimidine bases found in the nucleotides forming the monomeric units of nucleic acids, they are:

Uracil is found only in RNA, thymine in DNA, while cytosine is found in both RNA and DNA. 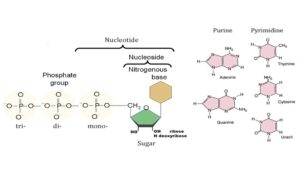 These are nitrogenous bases made of 2 fused rings, a pyrimidine and an imidazole ring. There are 2 major purine bases found in the nucleotides forming the monomeric precursors for both RNA and DNA in the living organisms including humans, they are:

The structure of the purine ring, the way of numbering the positions in the ring. In humans, a completely oxidised purine base, uric acid, is formed as the end product of purine catabolism.

Sugars of the nucleic acids

A nucleoside is composed of a purine or a pyrimidine base to which a sugar (ribose or deoxyribose) is attached. The sugar is present in the β-D configuration and is attached by its carbon No. 1 to N1 of pyrimidine or N9 of purine bases through N-glycosidic linkage.

Nucleotides are nucleosides phosphorylated on one or more of the hydroxyl groups of the sugar ( ribose or deoxyribose). The position of the phosphate in the nucleotide is indicated by a numeral. For example, adenosine with phosphate attached to carbon 5 of the sugar ribose would be designated adenosine-5- phosphate.

If the phosphate is attached to carbon 3 of the ribose, the nucleotide would then be designed adenosine-3-phosphate. The prime mark after the numeral is required to differentiate position on the sugar moiety from the numbered position on a purine or pyrimidine base, which would not be followed by the prime mark.

A nucleotide of deoxyadenosine with phosphate moiety attached to the carbon 5 position of the sugar would be designed deoxyadenosine-5-phosphate. The abbreviations of nucleoside monophosphate e.g. AMP, GMP, CMP, …..etc. are given to the mononucleotides present in the free form i.e. not a component of the nucleic acid polynucleotide.

S-adenosylmethionine is a nucleoside that is formed of adenine and ribose with methionine at 5´. It serves as a methyl donor in most of the transmethylation reactions in the body.

Uridine triphosphate (UTP): serves as a source of high energy phosphate for some reactions in the cell.