They are traits that their genes are carried on autosomes and the sex of individual acts to modify their dominance where the act of these genes is influenced by the hormones secreted from gonads of adult males and females , Sometimes, the sex of living organism acts to modify the dominance of some traits that are called sex-influenced traits, such as the presence of horns in cattle trait and genetic baldness trait in humans .

It spreads among males of some families more than the females , Its appearance is controlled by a dominant gene that carried on autosomes and influenced by the masculinity hormones only .

Therefore , the phenotype of the hybrid genotype  ( B+ B ) is different in male and female . 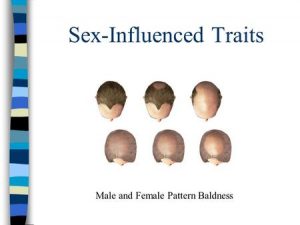 Medical examination before the marriage

Causes of medical examination of persons who will get married :

Importance of medical examination before marriage :

Discovering genetic fingerprint : In 1984, Sir Alec Jeffreys at Leicester University in London published a research showed that the genetic material ( DNA ) may repeat several times inside the living organism.

In 1985, he stated that these repetitive sequences are unique and characteristic for each individual and they are impossible to be similar in two individuals except in the identical twins only, He named them the human DNA fingerprint ( or DNA typing).

It is sequences of genetic material ( DNA ) repeat several times in the living organism , It is a mean used to identify individuals through comparing DNA sections ( fragments ) .

It is all genes found in the nucleus of each somatic cell .

In 1953, Watson and Crick proved that the gene is a double helix of the nucleus acid DNA, In 1980, the idea of human genome appeared and number of genes identical by scientists was about 450 genes , At the middle of eighties , scientists identified about 1500 genes .