Surgical tools must be sterilized during labour to protect the mother from infection with some diseases such as puerperal sepsis. Smoking is harmful to reproductive health because it causes the death of embryos and newly born babies and leads to an increase in the deformation rate in embryos.

Ovum and sperm in human

Structure of the ovum (female gamete)

It is large in size (as sesame seed size) due to the storage of nutrient materials. It is not a mobile cell (it is a static cell). It is a spherical cell. It consists of:

Structure of the sperm (male gamete)

It is considered very small if it is compared with the ovum. It is a mobile cell.

Fertilization and embryo formation in human 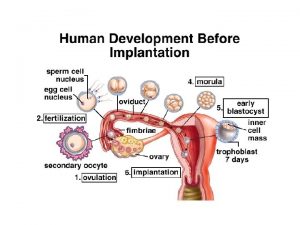 How does the fertilization process take place?

The ovum surrounds itself with a coat after the penetration of sperm inside it to prevent the penetration of any other sperm. The nucleus of a male sexual cell contains one-half of the genetic (hereditary) substance because, during fertilization, it combines with the ovum (egg cell), which contains one-half of the hereditary substance to form the zygote, which contains the complete hereditary substance of the species.

If the fallopian tubes are ligated. The sperm doesn’t reach the ovum, therefore the fertilization (pregnancy) doesn’t occur. So, Fallopian tubes ligation surgically is considered as one of the means of birth control.

The testes of the adult human male produce about 2 billion sperms per day. The lifetime of a single sperm inside the female vagina ranges from 2 to 6 hours, this period can extend to reach up to 3 days if the sperm managed to break through the cervix and enters the uterus where it feeds on the uterine secretions.

In case of failure in fertilization, the endometrium falls down and the blood capillaries detach causing blood to flow out of the vagina for 4 to 5 days in a process known as menstruation.

Diseases of the genital system in males and females are classified into two types, which are:

The microbe, that causes the disease: Spherical-shaped bacteria.

Incubation period: From one to four days.

The bacteria causing puerperal sepsis can be transferred to the patient by her own throat secretions, that is why a pregnant woman suffering any respiratory disease should be treated first before delivery especially in the last two months to avoid autoinfection.

The microbe, that causes the disease: Spiral-shaped bacteria.

If the patient is not treated as soon as the appearance of symptoms, this leads to:

Treatment: Syphilis can be treated in all symptoms stages.

The effect of smoking and addiction on the genital system

The studies showed that there are many bad effects of smoking on the reproductive health of males and females:

A plastic medical cover in the form of an elliptical plastic frame sold in pharmacies is to be used in public toilets to avoid infection by some skin and genital diseases.