Cartilages are a type of connective tissues that consists of cartilaginous cells, They do not contain blood vessels, So, they get food and oxygen from the bone cells by diffusion, Cartilages protect the bones from corrosion, as a result of the continuous friction between them.

Cartilages found usually at the tips of bones, especially at the joints and between the vertebrae of the vertebral column, The cartilages from some body parts such as ears, nose & bronchioles of the lungs.

In the human skeleton, there are three types of joints which are:

The bones which in contact with these joints are covered with a delicate layer of a transparent smooth cartilaginous substance which allows the movement of bones easily with less friction, They contain a synovial fluid that facilitates the sliding of cartilages that cover the tips of bones. 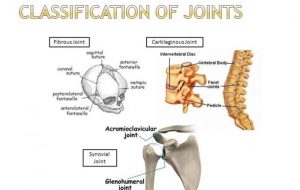 They are separated bundles of fibrous connective tissue, where their tips are fixed on the two bones of the joint, Their fibers are characterized by:

Function: They link the bones with each other at the joints, They determine the movement of bones at the joints in a different direction.

Example: Ligaments of the knee joints which are:

In some cases, the ligaments may be ruptured, due to the twisting of some joints as in the case of the cruciate ligament in the knee joint.

They are strong connective tissue, They link the muscles with bones at the joints which allow the movement during the concentration and the relaxation of muscles, Example: Achilles tendon.

Its importance: Achilles tendon connects the gastrocnemius muscle with the heel bone.