Early development is characterized by the rapid proliferation of embryonic cells, which then differentiate to produce the many specialized types of cells that make up the tissues and organs of multicellular animals. As cells differentiate, their rate of proliferation usually decreases, and many cells in adult animals are arrested in the G0 stage of the cell cycle.

Cell proliferation is carefully balanced with cell death to maintain a constant number of cells in adult tissues and organs. Somatic cells in the adult can be grouped into three general categories with respect to cell proliferation:

Static cell population: These are non-dividing permanent cells, thus they would not be replaced if injured or lost. They leave the cell cycle to perform a specialized function. Static cells include cardiac muscle fibers and neurons.

Stable cell population: These are quiescent cells that do not usually divide. They are considered to be in the G0 phase but be they may be stimulated to divide by appropriate signals as injury, thus their renewal occurs by duplication of existing cells. They include smooth muscle fibers and the epithelial cells of most internal organs such as the liver and kidney.

It is the process by which unspecialized cells (as embryonic or regenerative cells) acquire specialized structural and/or functional features that characterize the cells, tissues, or organs of the mature organism.

They are primal cells which are the source, or “stem” for all of the specialized cells that form organs and tissues. 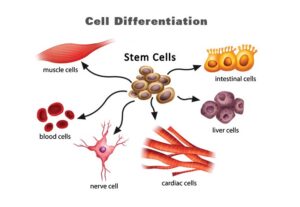 They have the potential to generate all types of cells and tissues and can construct a complete, viable organism. Totipotent stem cells are derived from the cells produced by the first few divisions of the fertilized ovum ( morula cells).

They are the descendants of totipotent cells, derived from the inner cell mass of the blastocyst. They can differentiate into more than 220 cell types in the adult body, these are the derivatives of the three primary germ layers, ectoderm, endoderm, and mesoderm. Pluripotent stem cells undergo further specialization into multipotent progenitor cells.

They can produce cells of a closely-related family. They include the multipotent hematopoietic stem cells that can differentiate into red blood cells, white blood cells, and platelets.

They can produce mature cells of a single type but still, have the property of self-renewal which distinguishes them from non-stem cells. They include stem cells in the skin epidermis.

The normal cells are able to handle normal physiologic demands. If the cell is exposed to severe stresses, it goes into cellular adaptations. When the adaptive response to a stimulus is exceeded, reversible or irreversible cell injury occurs. If the stimulus persists, the cell reaches a “point of no return” and ultimately cell death. There are 2 different mechanisms of cell death, necrosis, and apoptosis.

Necrosis = accidental cell death: it is a pathological process due to various unfavorable factors e.g. hypoxia, radiation, or as a result of pathogens such as viruses.

It is a physiological process controlled by several genes, during which loss of mitochondrial function initiates a cascade of reactions that can set on cell death. Apoptosis occurs in many conditions, including: