Female genital system produces ova, It secretes the female sex hormones, It provides a safe place for the completion of the fertilization process of the ovum and for the embryo development till the birth, Organs of the  female genital system lie behind the urinary bladder in the pelvic region, they are firmly connected in this position with elastic ligaments which allow their expansion during pregnancy.

The female genital system of human consists of The two ovaries, The two Fallopian tubes, Uterus & Vagina, As a female approaches maturity (at the age of 12 – 15 years), there are monthly rhythmic changes that take place in the female genital system according to the ovarian, uterine activities and what is correlated with them of fertilization and pregnancy or non-pregnancy and the monthly bleeding menstruation.

At the age of (45 – 50 year), the ovaries become inactive, therefore the hormones secretion decreases, the uterine lining shrinks and the menstruation stops, This is known as menopause. 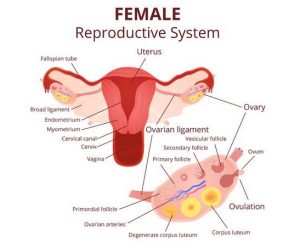 They lie on the two sides of the pelvic cavity, Each ovary is oval in shape and in the size of a peeled almond, During childhood, each ovary contains several thousands of ova in various stages of development, After maturity, about 400 of these ova only will mature during the thirty years of active reproductive life (fecundity years).

From each ovary, one mature ovum is discharged alternately with the other ovary each month, Importance of ovary is the production of ova, The secretion of the maturation hormones for regulating the menstrual cycle and embryo development.

Each oviduct (Fallopian tube) begins with a funnel-shaped opening that lies just opposite to the ovary to ensure the fall of ova in the Fallopian tube, It is provided with finger-like processes to receive the ovum, Each Fallopian tube is lined with cilia to direct the ovum towards the uterus.

It is an elastic muscular sac-like organ that presents in the pelvic cavity and provided with a thick strong muscular wall, It is lined with a glandular membrane, It ends with a cervix which opens into the vagina, The embryo is formed inside the uterus for nine months.

It is a muscular tube whose length is about 7 cm, It starts from the cervix and ends with the genital opening, It is lined with a glandular membrane that secretes a mucous fluid to moisten the vagina, It has folded to allow its expansion during birth.

The process of oogenesis passes through three important stages which are as follows:

Multiplication stage: This phase occurs during the development of the female embryo, where: Mitotic division takes place to the primary germ cells (2n), This division results in the formation of cells that called oogonia (2n).

Growth stage: This phase occurs during the female embryo development, where: The oogonia (2n) store an amount of food, increase in size and transform into primary oocytes (2n).

A second meiosis division may occur to the polar body (n), giving two polar bodies (so that the total polar bodies number is three).

Ovum contains nucleus and cytoplasm, It is enveloped with a thin cellular coat whose cells are held together by the action of hyaluronic acid, Therefore, millions of sperms are required to penetrate the ovum, where the enzymes that are secreted from the acrosome of the sperms (hyaluronidase enzyme) dissolve this coat at the penetration position.

Breeding cycle is a certain period in the life of placental mammals, where the ovary becomes regularly active in the adult female, These periods are synchronized with the sexual function of breeding and reproduction.

The period of the breeding cycle differs in the various mammals, where it may be:

This cycle is divided into three stages, as follows:

The anterior lobe of the pituitary gland secretes the follicle stimulating hormone (FSH) that stimulates the ovary to form the mature Graafian follicle which contains the ovum.

The corpus luteum secretes the progesterone hormone which increases the thickness of the endometrium and its blood supply (preparing the uterus to receive the embryo), This stage lasts about 14 days.

This phase occurs, if the ovum is not fertilized, where: The corpus luteum degenerates gradually, then the secretion of progesterone hormone decreases that leads to the:

In case of the ovum fertilization: