The skeleton in man consists of 206 bones, where each bone has a shape and size that are suitable for its function.

Structure of the skeleton: 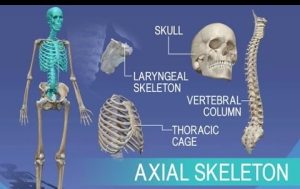 It consists of 33 vertebrae that are divided into 5 groups and differ in the shape according to the site of their presence as follows:

The number of bones of vertebrae column in human is about 26 bones, The structure of bony vertebra consists of several parts which are:

The function of the vertebral column: it acts as the main support of the body, It protects the spinal cord, It helps in the movement of the head and upper body parts.

It is a bony case that consists of two parts which are:

The thoracic cage consists of twelve pair of ribs which are as follows:

The two lower pairs of ribs (pairs no. (11) and (12): are short and do not reach the sternum, So, they are called the floating ribs and they are attached to the vertebrae no. (18) and (19) of the vertebral column.

The rib is a curved bone that bends downwards and attached posteriorly to the centrum of the thoracic vertebra and its transverse process, The sternum is a flat bone that is pointed at its lower part which is cartilaginous and to which the first ten pairs of ribs are attached.