Alkenes (Olefins) are open chain aliphatic hydrocarbons, their general formula is (CnH2n), where n is the number of carbon atoms, Total number of atoms = 3n, Olefins are hydrocarbons in which one double bond or more are found between the carbon atoms of their molecules, Alkenes are considered as Alkanes derivatives by removing two hydrogen atoms from the corresponding alkane, therefore, they form a homogeneous series.

The name of alkene is derived from the corresponding alkane by replacement of the ending ane by ene or ylene, Alkenes are characterized by the presence of a double bond between carbon atoms, one of them is a strong sigma bond (σ) and the other is weak pi bond (π) which is easy to be broken, this explains the activity of alkenes.

Preparation of Alkene by catalytic dehydration of Alcohol: Ethene can be prepared by removing water from ethyl alcohol by using hot concentrated (H2SO4) at 180°C, The function of sodium hydroxide in the apparatus to neutralize the vapours of H2SO4.

Economic importance of ethene: It is used in the preparation of polyethene and ethylene glycol which is used in the manufacture of ( dacron fibers, photographic films, cassette tapes). 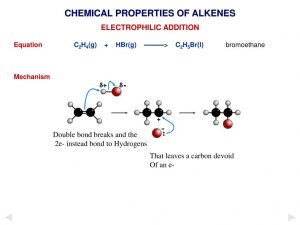 Alkenes are more active than alkanes due to the presence of the weak pi bond (π), which are easy to be broken.

Hydrogenated oils (artificial fats): The vegetable oils as maize oil, sunflower oil contain unsaturated compounds, therefore, their melting points are low and they exist in liquid state at normal temperature even they are kept in refrigerator, The hydrogenation of these oils in the presence of Ni make them solidify due to the conversion of unsaturated compounds to saturated compounds.

Halogens react with alkenes by addition, this reaction is used to detect unsaturated alkenes, when bromine in carbon tetrachloride (CCl4) is added, the red colour of bromine is discharged when it is added to ethylene due to the formation of a colourless 1,2 dibromo ethane which is colourless.

Since water is a weak electrolyte, the concentration of Hydrogen ions (H+) is very weak and it is unable to break down the double bond, therefore, the reaction takes place in the presence of strong acid to increase the concentration of hydrogen ions, sulphuric acid is added firstly to ethene to form ethyl hydrogen sulphate which is hydrolyzed to give ethyl alcohol.

Addition of water to ethene takes place in acidic medium to increase the concentration of H+ which has the ability to break down the weak pi-bond.

Oxidation of ethylene with alkaline potassium permanganate (KMO4) where the pi bond (π) between the unsaturated carbon atoms is broken and the two hydroxyl groups are added forming dihydroxy compounds known as glycols (ethylene glycol).

This reaction is used to detect the presence of double bond (unsaturated) where the violet colour of permanganate is removed as it reduced proving the presence of pi bond (π).

Ethylene glycol is used as antifreeze substance which prevents the freezing of water in car radiators where it forms hydrogen bonds with the water molecule and prevents their combination with each other in the form of ice crystals.

Polymerization is the combination of a huge number of unsaturated simple molecules (monomers), their number ranges from 100 to 1000,000 to form a large molecule (polymer) which has the same empirical formula of the original compound, Empirical formula is the formula which shows the smallest ratio of atoms inside the molecule.

Addition polymerization takes by the combination of a similar huge number of unsaturated small molecules (monomers) to each other to form a very large molecule (polymer) such as the formation of polyethylene.

Example: When ethene is heated under high pressure (1000 atmosphere) in the presence of oxygen or hydrogen peroxide H2O2 as initiator substance, polyethylene is formed, its molecular formula reaches to about 30,000 (notice that the molecular mass of ethene 28 only).

In the addition polymerization of ethene, Pi bond is broken and the electrons of this bond are liberated, Each carbon atom now has a free electron, then the carbon atoms of each molecule combine by their free electrons with those of other molecules by a single covalent bond to form a long chain of polymer molecules.

Condensation polymerization takes place between two different monomers and it is accompanied by losing a simple molecule such as water, the copolymer formed is considered as the basic unit which continues the polymerization process.

Uses of some polymers