Alkanes are used to prepare black carbon, water gas, alkyl halides, alcohols, and aldehydes, They are homologous series as each compound exceeds the previous one by (– CH2) group, They have a general molecular formula, the same chemical properties and graduated in physical properties, Liquid and gaseous alkanes are used as fuel.

The first four members of alkanes are gases at normal temperature, Methane can be used as fuel at homes, while the mixture of propane & butane is liquified and packed in cylinders , It is used as fuel (butagas), since propane more volatile ( less boiling point) than butane, so we find that the ratio of propane is much more in cold countries, while in warm countries the cylinders contain larger ratio of butane.

Alkanes are non-polar compounds and insoluble in water, but they are soluble in organic solvents, So the metals are covered by a heavy layer of alkanes like grease to protect them against rust and corrosion, The boiling point and melting point increase by increasing number of C atoms. 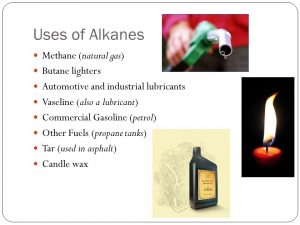 Alkanes are comparatively, inactive compounds because the carbon atoms in alkanes are combined together by the strong sigma bonds, these bonds can’t be broken easily except under certain conditions such as burning, substitution and thermal catalytic cracking.

Alkanes are chemically unreactive, they are neither affected by mineral acids at room temperature nor affected by oxidizing agents such as KMnO4 or K2Cr2O7, This is due to the presence of sigma bond (σ) which is difficult to be broken.

All alkanes burn giving water vapour, carbon dioxide and heat, these reactions are highly exothermic, that is why they are used as fuels.

In case of direct sun rays (Elimination), the reaction is accompanied by an explosion.

Uses of halogenated derivations of alkanes

Chloroform CHCl3 was used for a long time as an anesthetic substance but its usage was stopped because the inaccurate estimation of the dose for each patient causes the death, Halothane is used now as an anesthetic substance with safety & its formula is CHBrCl–CF3, 2-bromo-2-chloro-1,1,1 triflouro ethane, The compound 1,1,1 trichloro ethane is used in the dry cleaning.

Freons were used in air conditions and fridges, also as a rushed substance to liquid and perfumes and as a cleaner of electronic sets, Freons are considered as halogenated derivative of alkanes that composed of (C,F,Cl) as CF4 tetraflouro methane but the famous one is dichloro diflouro methane CF2Cl2 ,So freons contain (C,F,Cl).

Freons are used by large quantities due to its cheap price, easily to be liquified, odourless, non poisonous, non flammable and non corrosive for metals, However Freons cause the decay of the ozone layer which protects the earth against harmful effect of ultraviolet rays, So, there is an international agreement to prevent the usage of freons starting from 2020.

This process usually takes place during the refining of petroleum oil to convert the heavy long petroleum chains (less used) to the daily used lighter short chain products, this process takes place by heating the heavy petroleum products under high pressure and temperature in the presence of a catalyst to produce two kinds of products.

Thermal catalytic cracking (for octane only) is a process in which the long carbon chains are broken into shorter ones by the action of heat, pressure and catalysts.

The economic importance of alkanes

Alkanes are used to obtain finely divided carbon (black carbon) by thermal cracking, The black carbon is produced by heating methane to 1000° C in the absence of air, Black carbon is used in the manufacture of car tires, black painting, polishes, and printing ink.

Alkanes are used to obtain water gas, water gas is a mixture of hydrogen and carbon monoxide which is used as a reducing agent or as a flammable fuel, Hydrogen gas formed by this reaction is used in several industries such as in the manufacture of ammonia gas, Water gas is used in medrix furance to reduce Fe2O3 to Fe.

(Alkane) Methane is used as fuel in houses because it burns in the air giving CO2, H2O and heat, The reaction is an exothermic reaction, so methane is used as a fuel, Alkanes are used to prepare a large number of important compounds as alkyl halides, alcohols, and aldehydes.