Alloy is usually formed from two metals, it is formed of two metals or more with a certain ratio as iron alloys (ferromanganese, ferrochromium) and it may consist of metal and nonmetal with a certain ratio as Iron and carbon, Transition elements are characterized by the formation of several alloys because the atomic radii of transition elements are relatively constant.

The alloy is a substance that has physical properties of metals, Metals are used industrially in alloys not as pure metals because alloys have new properties which differ from those of pure metals such as: 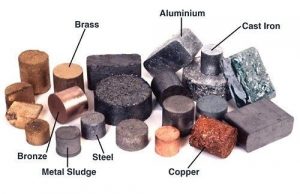 Alloys in which a metal whose atoms are smaller in size than those of the pure metal is introduced in the intermolecular spaces of the crystal lattice of the pure metal to increase its hardness and change the physical properties as malleability, ductility, melting point, electric conductivity and magnetic properties such as iron and carbon alloy (steel).

Pure iron as other metals is formed of the crystalline lattice of metal atoms in a closed packed structure, On hammering the metal, a layer of atoms can slip over the other layers, In the state of introducing large atoms to form Alloy, If the introduced atom is larger than those of pure metal, the structure of pure metal is deformed and the dislocation of the layer becomes more difficult, so, the alloy is hard than the pure metal.

In the state of introducing small atoms to form Alloy, when the introduced atoms are smaller than the small spaces between the metal atoms, they will fit these spaces and will lead also to change of physical properties of the metal.

Alloys in which some atoms of the pure metal are replaced by atoms of the other metal which has the same radius, crystal lattice and chemical properties such as Ferronickel alloy (Fe, Ni), Stainless steel Alloy (Fe, Cr), (Gold and copper) Alloy and it takes place between two transition metals.

Alloys formed as a result of a chemical combination between metals of different groups in the periodic table and the chemical formula of these compounds disobey the laws of valency, such as Aluminum-Nickel alloy (Ni3Al) which is called Duralumin and lead-gold alloy (Au2pb) and cementite (Fe3C), Duralumin is an alloy of aluminum and nickel, formed by the chemical combination (Ni3Al).

Pure iron has no industrial importance because it is relatively soft, It is quite reactive, with low hardness, malleable, ductile, with magnetic properties, It melts at 1538°C and its density is 7.87 gm/cm³, Physical properties of iron depend upon its purity and nature of its impurities, Steel and other iron alloys may be produced with specific properties suitable for many uses.

The effect with diluted acids: Iron dissolves in dilute mineral acids producing iron (II) salts and Hydrogen, not iron (III) salts which are reduced by the produced hydrogen.

By reduction of higher oxides by hydrogen or carbon monoxide.

Its existence: This oxide present in nature in the form of hematite.

Its existence: It can be considerd as a mixed iron II and iron III oxides (FeO and Fe2O3) knowing naturally as magnetite.

It is oxidized to iron III oxide when it is heated in air.

A piece of iron which is previously immersed in conc. nitric acid does not react with copper sulphate solution because of the passivity phenomena, where a thin non-porous layer of oxide is formed on the iron surface and protect it from the reaction with copper sulphate.

It is preferable to use iron in the form of an alloy not in the pure form because the pure iron is relatively soft with low hardness, malleable and ductile with magnetic properties but alloys of iron are produced with specific properties suitable for many uses.