The mathematical solution of Schrodinger’s equation introduced four numbers that were called quantum numbers , to determine the energy of an electron in multi-electron atoms , we should know the four quantum numbers which describe it .

These four quantum numbers are :

Bohr had used this number in explaining the spectrum of hydrogen atom , it is given the symbol ( n ) and it is used to define the following :

The order of principal energy levels or electron shells , Their number in the heaviest known atom in its ground state is seven .

The number of electrons (e−) required to fill a given energy level which equals the formula 2n² ( two times the square of the shell number ) .

The rule 2n² isn’t applied to the energy levels higher than the fourth level , because the atom becomes unstable , if the number of electrons exceeds 32 electrons in any level . 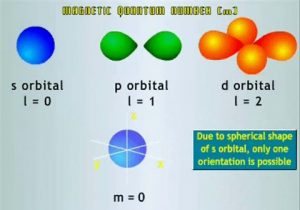 There is a small difference in the energy of the sub-levels , They can be arranged according to increasing their energy , s < p < d < f .

It determines the number of orbitals within a certain energy sub-level from the relation ( 2l + 1 ) .

The orbitals of the same sub-levels are equal in energy , but differ in direction and shape in space , Any orbital can’t be occupied by more than two electrons .

Example : Which of the following probabilities of the quantum numbers of a certain electron includes a mistake ?

The spin quantum number determines the type of spin motion of the electron around its axis in the orbital , which is either :

The spin motion of the two electrons of the same orbital around their own axis arises a magnetic field in two opposite directions ( spin-paired state ) ( ↑↓ ) .

Orbitals have three different possibilities depending on the number of electrons located in them as follows :

Although the two electrons of the same orbital carry the same negative charge , they do not repel with each other , because the magnetic field arises from the spinning of one electron is in a direction opposing the direction of the other magnetic field arising from spinning of the other electron and that decreases the repulsive force between the two electrons .

Summary of the relationship between the principal energy level , sub-levels and orbitals .

Each sublevel consists of a number of orbitals which equals ( 2l + 1 ) .

There are some important rules , which must be considered in distributing electrons in the atom , These rules are :

Pauli’s exclusion principle : It is impossible for two electrons in the same atom to have the same four quantum numbers .

When ( np ) sublevel contains one electron , it is not necessary to be :

Aufbau ( building-up ) principle : Electrons occupy the sub-levels in the order of increasing their energy , the lowest energy sub-levels are filled firstly .

The sub-levels of the same principal energy level differ slightly from each other in energy .

Arrangement of sub-levels according to their energy depends on :

The electron configuration for one of the energy levels can be expressed as the following : 2p6

Where , 2 is the principal energy level ( n ) , p is the energy sub-level , 6 is number of electrons in the orbitals of sub-level .

Hund’s rule : No electron pairing takes place in a gives sub-level until each orbital contains one electron .

Rules of filling the energy sub-levels with electrons , according to Hund’s rule :

The spin of single electrons in the same sub-levels orbitals is in the same direction , because this state gives the atom more stability .

The electron prefers to occupy an orbital alone in the same sub-level rather than pairing with another one in the same orbital , Because when two electrons are paired in one orbital , ( in spite of their opposite spins ) , there must be a repulsive force that decreases the stability of the atom ( increasing in its energy ) .

The electron prefers pairing with another one in orbital in the same sub-level rather than transferring to the higher energy sub-level , because the required energy to overcome the repulsive force between the two paired electrons is less than that is required for transferring the electron to a higher sub-level .

Example : Predict the atomic number for each of the following elements :