The second factor causes an increase to the atomic radius, The increase in the number of the electrons in 3d sublevel will increase the repulsion force between them, As a result of these two opposite factors, atomic radii of these elements are relatively constant which explains using them in making alloys. 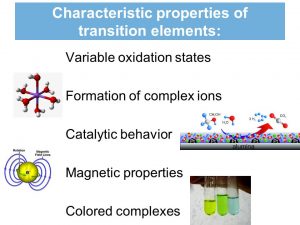 There is a gradual decrease in the atomic size from 21Sc till 29Cu, (relatively constant from Cr to Cu), Transition elements have small atomic size and variation in atomic size is small, it is difficult to oxidize the elements due to the slight decrease in radius & the increase of the nuclear attraction force to the valency electrons.

The gradual decrease in atomic radius across the elements of the first transition series from left to right is not large because the repulsion of the electrons added in the orbital compensates the decreasing in the radius due to increasing of the nuclear attraction to electrons as the effective nuclear charge increases.

The metallic property appears in transition elements due to:

Cu and Zn are relatively soft and of lower boiling points as their metallic bonds are weaker, since they involve the participation of 4S electrons only, The transition elements have some properties which differentiate them from the representative elements, these properties are magnetic properties, the coloured compounds, catalytic activity of the elements & the compounds.

The magnetic moment of the paramagnetic substances increases with the increase in the number of the unpaired electrons, most of compounds of the transition elements are paramagnetic because of the spinning movements of the electrons.

Vanadium pentoxide V2O2 is used as a catalyst during the preparation of sulphuric acid by the contact method.

The catalytic activity of the metals of the first transition series refers to presence of the 4S and 3d electrons which can be used in the formation of bonds between the atoms of the surface of metal and the reacting molecules leading to the increase of concentration of these molecules on the surface of the catalyst weaken the bond in the reactant molecules and so decrease the activation energy which help to increase speed of reaction.

Elements of the first transition series are good catalysts, finely divided nickel is used as a catalyst for hydrogenation of oil due to the presence of the 4S and 3d electrons which form bonds between the reacting molecules and the surface of the catalyst which leads to:

Most of the compounds of transition elements and their aqueous solution are coloured, The colour is formed due to the absorption of some photons in the area of visible light, Eye sees only the remained colour (reflected) which is a mixture of some colours.

The light is a form of energy and each compound of transition elements especially which has unpaired electrons in the d sublevel when exposed to light their electrons are excited by a certain colour of white light, (white light consists of 7 colours), so, the substance absorbs it and does not absorb others (complementary), which we see substance by it.

Complementary colours are the net of colours which are not absorbed by the substance, They are the colours seen, Example: Chromium (III) compounds absorb red colour, so it appears green, There are some compounds although the (d) sublevel is d0 or d10 , they are coloured such as KMnO4 is violet although Mn+7.

Cobalt compounds appear with blue colour because the energy required exciting the unpaired electrons in the 3d-sublevel is equal to the energy of the orange colour, so, it appears with the complementary colour which is the blue colour.

Solutions of cobalt salts are coloured because 3d7 sublevel is partially filled which means there is a number of unpaired electrons in the d-sublevel, so it absorbs a colour from the white light and complementary colour is seen, whereas solutions of zinc salts are colourless because 3d10 sublevel is completely filled which means, there are no unpaired electrons in the d-sublevel, so it doesn’t absorb any colour.