Premiere Pro CC is a superb evolving professional video editing program from Adobe, It is used by the graphic designers, the photographers, the computer animators or anyone who uses or will use an Adobe program such as After Effects, Illustrator, Lightroom, or Photoshop, Ideal for photojournalists, filmmakers or the other professionals or enthusiasts in the visual creative fields.

This professional video editor is one of the few names in the business which earns the title industry standard , Adobe does a stellar job of listening to its users & offering the tools & features they want , So , The nonlinear editor has the power , versatility & depth to create any video project , such as a full-length movie , music video , vlog post or the instructional demonstration . 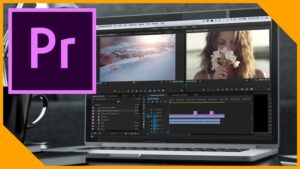 You have to capture or import your video footage , audio & the other elements into the software , Importing media that is on your computer is the most straightforward and capturing the files from the digital media , such as your camera is similarly simple , So , You don’t have to worry about proprietary formats while you work with footage from disparate camera types .

It is a powerful editing software , 64-bit can ingest footage without trans-coding , It integrates with Photoshop , After Effects & the other Adobe programs , It can be purchased for Premiere , or as part of the Creative Suite , or leased from Adobe cloud , Adobe is introducing server based editing , Adobe Anywhere , so , The editors can work on the same project from remote computers , Premiere works on Macs and PCs .

Adobe Premiere Pro offers all of the industry standard features , It supports alpha channels , you can customize your keyboard settings , the one feature of this product which makes it superior to the rest ( including Premiere Elements ) is that it syncs effortlessly with the other parts of the Adobe Creative Suite ( like Photoshop and After Effects) ,This ease of use can save you valuable time when working on a project .

Adobe Premiere can work easier with audio , color & graphic elements , It is used by the current & new generation of filmmakers whose films may contain graphic elements or animations , There are new features in Premiere Pro such as synchronizes audio & video automatically , creating a new unified media clip in your bin that has the audio & video aligned .

Premiere Pro CC can cater to the nuanced demands of pro & veteran video editors , It offers a feature which lets you apply the effects & the alterations to footage while it is in the media bin , So , Whenever you use a clip from that footage in the timeline , your effects are already in place , So , It is a huge time-saver & an example of how Adobe is focused on making the editing process easier & faster .

It offers great improvements to audio workflow , It has Graphics templates & It has more streamlined title tools , one of the most basic audio tasks in any professional video editing application is synchronizing separately recorded audio tracks with their video counterparts , This is what you have to do when you shoot on a DSLR camera , With most video editing software .

It can improve the timeline editing by JKL trimming , JKL means the keyboard shortcuts that allow you to scrub through the elements on your timeline , JKL trimming marries these shortcuts with the trimming tool , This allows you to scrub & trim simultaneously , performing precise cuts to footage as you watch it .

Rather than making a cut , watching it & going back to find the spot where you need to trim the clip , It is a massive time-saver & it allows you to refine a sequence with more speed and precision than the other applications .

Adobe Premiere Pro CC offers brand-new capabilities for importing & manipulating closed captions , You can export media with closed captions , either embedded or as separate files , A new Mercury Playback Engine means editors get real-time performance when working on complex sequences , thanks to support for a wider range of GPUs .

Adobe Premiere Pro CC has enhanced , cross-platform support for OpenCL , CUDA promises to help you render less often & work faster with third-party effects , Sync your settings with Creative Cloud & all your customized settings , including work-spaces & keyboard shortcuts , will be accessible from any internet-connected computer .

Adobe Premiere Pro CC offers an improved multi-cam editing , So , you can set up multi-cam edits faster with a streamlined workflow , You can sync single shots or entire bins of footage all at once using audio wave-forms , You can mix frame rates & codecs in the same sequence .

Adobe Premiere Pro CC has a new script-writing tool , So , you can import the scripts & the associated metadata with the new story panel in Adobe Premiere Pro , This means you can quickly navigate to specific scenes , locations , dialogue and characters as you edit .

It gives you many source formats with no need for trans-coding or rewrapping , For tape-based workflows , the new Edit-to-Tape panel allows for easier lay-back , You are able to see the details you need right in the Source & Program Monitor panels , Switch between video & audio wave-forms with one click , Adobe Premiere Pro CC supports HiDPI for enhanced viewing on the newest Mac OS monitors .

There are many price options , including monthly rental , but Adobe Premiere Pro CC is more expensive than Final Cut Pro 10 , With so much control comes small buttons , sometimes hidden and processes that take multiple clicks , Like Photoshop , it is incredibly powerful , but not always intuitive on the surface level .

The cost , Whereas you can buy Premiere Elements for a mere $100 , Premiere Pro is going to cost you about $800 , If you’re a beginner editor , this program might be a little overwhelming at first , There are lots of elements to this software and you need to know what you’re looking for in order to find it .

It requires a more powerful computer to run properly , Adobe Premiere Pro is extremely expensive , while Movie Maker comes free , The pitch shifter doesn’t work as well , you should have a crazy good CPU , nest a clip before applying the shifter or just get lucky with your PC in order to pitch shift properly , ( If you’re having problems , nesting a clip is an almost guaranteed way to fix it ) .

It is hard to get working with VST plugins , If you have a newer version of Premiere ( Specifically CC 2015 ) then VSTs are easy to install , almost as easy as Vegas , But if you’re on a version much earlier than that , it is gonna be a massive pain , ( Unless you are willing to use Audition for VST effects ) .

The interface clashes with usual Mac look and feel , Visual interface is starting to feel dated , Subscription-only model , you have a limited number of tools to choose from to craft your project into a finished product , You could opt for the granddaddy of them all .