Sony Vegas Pro is one of the biggest names in professional video editing software , It is used to create movies , TV shows , music videos and more , It offers a very intuitive user interface , It has all the tools & features you need to create highly polished projects from YouTube videos to feature films , All you have to do is learn how to use it properly .

Sony Vegas Pro is a professional non-linear editing system ( NLE ) published by Sonic Foundry , now It is owned and run by Sony Creative Software , It is developed as an audio editor , It is developed into an NLE for video and audio from version 2.0 .

Sony Vegas Pro excels at creating visual special effects , 3D titling & compositing , It allows you to author DVDs & Blu-ray discs , Its ever-expanding tool set makes it a good choice for pro video editors who want the power and granular control needed to make a high-quality videos demanded by their audience .

Sony Vegas Pro comes with all the features professional editors need to create their video projects , There are many tools such as Chroma key , white balance , image stabilization , stereoscopic 3D editing , multi-cam editing and masking .

This pro video editor offers built-in interactive tutorials that show you how many of the tools work , There is another unique tool in this software which is Vegas Pro Connect iPad app , It lets you perform basic desktop functions on your tablet , You can control playback , drop markers & collaborate with the other editors who have the app . 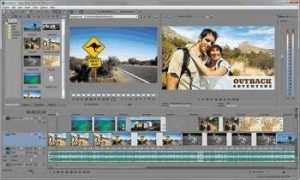 Proxy-first workflow allows crews in remote locations to send proxy footage back to their home base for editing with a camera-mounted adapter , This is an amazing tool because it allows editors to begin work on footage only moments after it’s captured from pretty much anywhere in the world , The only requirement is an internet connection .

Sony Vegas Pro offers intelligent up-scaling , So , you can take your regular HD footage & enlarge it to 4K resolution , This is great because it allows you to work with footage that may be older with clips filmed with the newest ultra-high-resolution cameras , This is good because Vegas Pro has extended its camera support to include the RED digital cinema cameras .

Sony Vegas Pro does not require any specialized hardware to run properly , allowing it to operate on any standard Windows computer across a broad range of hardware , Sony Vegas Pro offers 3D track motion compositing with control over z-depth & spatial arrangement of visual planes including plane intersection .

Sony Vegas features integration with 24p DV , It is one of the few NLEs that can convert other formats to 24p ( or any format to any other format ) without any kind of a plugin or third-party application support and It is the only pro NLE that allows for multiple instances of the application to be opened simultaneously .

The clips & sequences can be copied and pasted between instances of Vegas with ease , one instance can be rendering a sequence in the background while the user continues to edit in a different instance of Vegas in the foreground , It presents a green screen feature where you can merge pictures into each other .

Sony Vegas is very easy to learn , It can help you to make high quality movies , It supports a gallery of video formats ( HDV and AVCHD included ) and it offers reliable instruments for video compositing or color correction , Vegas Pro lets you share your work by burning the clips to DVD or Blu-ray discs as well as publish them to YouTube .

Vegas offers much more powerful audio tools than most other video editing packages and the user interface is customisable , You can save screen layouts for editing , grading or mixing and recall them at the press of a button and It works beautifully with multi screen setups .

The built in effects options give you 90% of what you need and then there are many plugins available for those extra effects , Vegas has recently adopted the OFX plugin format which means we are seeing many more plugins compatible with Vegas .

Sony Vegas Pro’s interface is highly flexible , It allows comfortable management of all the panels you need for the  project , You can create your own window layout , while everything else is tabbed to the other part of the application window .

The timeline is the central piece of the interface as it holds all the layers of the resulting file , be audio or video , You can now combine multiple tracks into a single group , making management of all the items much easier , Automation settings have been reformed to a drop down menu .

The Trimmer enables you to work with one media file at a time , Working with data this way offers an improved perspective than editing the events in the timeline , It can be used to automatically overwrite the elements in the timeline as you make the changes .

Although Sony Vegas Pro 12 is primarily a video editing software program , It offers audio mixing , DVD or Blu-ray disc authoring , It is specifically dedicated to 64-bit versions of Windows operating system , It offers stereoscopic 3D tools and GPU-ignited effects processing & rendering , It offers universal support for importing the projects from the other video editors , the Panasonic P2 format of the Sony Vegas 12 preserves 10-bit color when rendering .

Although it is designed for the professionals , Sony Vegas Pro offers interactive help that explains the basics of the program , The tutorials initiate the user by showing how different tasks can be done , The image stabilization tool presents multiple profiles to choose from and three types of motion which are pan/tilt , roll and zoom .

The production assistant plays an important part if you want to complete your projects faster , as it lets you open up projects already customized with a template , The interface is flexible & easily customizable, allowing you to create your own layouts and save them for later use , Support for scripting in C# , Jscript or Visual Basic , .NET .

While Sony Vegas Pro 12 offers many positives , it also provides several downfalls , One of the major downfalls for this program is that it is only compatible with Windows , This is bad news for the large population who use Mac computers , The technology bloggers at CNET also note this program’s dated & bland interface , which puts it behind its competitors when it comes to buyers looking for frills and a modern edge .