Autodesk 3ds Max is used by video game developers , many TV commercial studios and architectural visualization studios , It is used for movie effects & movie pre-visualization , It has modeling capabilities & a flexible plugin architecture and it can be used on Microsoft Windows platform .

3Ds Max software consists of many rich features that helps the modelers , the renders and the designers to create flawless photo-realistic 3D images as well as 3D animations of any construction element , Beside AEC industry , This software has a wide ranging usage in Media , Advertisement and Entertainment industry . 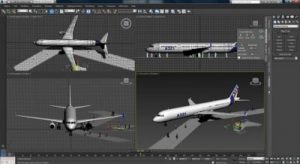 Autodesk 3ds Max is formerly 3D Studio , then 3D Studio Max is a professional 3D computer graphics program for making 3D animations , models , games and images , Character Studio is a plugin that helps the users to animate virtual characters , since version 4 of Max is now integrated in 3D Studio Max .

Scene Explorer is a tool that provides a hierarchical view of scene data and analysis , It facilitates working with more , 3ds Max has got a lot of small tools that make the job done faster , There are some nice plugin renderers available for 3ds Max .

3D Max software is a favorite with the architectural and the visualization animators , 3D Max has great conceptual modeling tools , large-scale environment creation , It works well with the other Autodesk product lines to name a few of the main features and it is more affordable .

3D max software has strong rendering capabilities , improved interoperability with industry-standard products as well as the additional time-saving animation and mapping workflow tools , It can add animated people with Populate and lots of small fixes .

3DS MAX has better User Interface than Maya , It offers some tools and modifiers that are very comfortable and make the job easier ( like Symmetry modifier ) , 3D Max is used more for games while Maya is used for film work , Max has better modeling tools , while Maya has better animation tools .

3ds Max software is developed and produced by Autodesk Media and Entertainment , It has launched its several versions in the market , Among them the most recent version is 3Ds Max 2014 .

Many new tools have been added to 3Ds Max 2014 version for accomplishing such as Crowd generation which is a new feature now that assists the artists in creating crowd of moving people , So , this superb feature helps you in getting proper 3D architectural visualization of your project .

Perspective matching is a new feature that allows the users in easily fitting any 3D model , such as Architectural 3D models , Mechanical 3D models , etc , within any still-frame photographic background images effectively .

Particle animation is in this version , the entire particle flow system has become more powerful and flexible , The particle flow interface has been enhanced to a large extent , It can assist the users in generating more realistic and elegant physical simulations within a short span of time .

Vector map support is also a new feature , 3Ds Max 2014 version enables the users to load the vector graphics as the texture maps , The users can render these texture maps at dynamic resolutions , So , the graphics will remain the same and clear if these graphics are zoomed-in effectively .

There is Global illumination , General map creation and 3D rendering , Dynamic simulation and radiosity , They facilitate you a customizable user interface along with its own scripting language , 3Ds Max 2014 version supports Microsoft DirectX 11 shaders , It comprises the advanced concept , It comprises the advanced concepts and technologies which are used for today’s modern pipelines .

3Ds Max 2014 software facilitates the users in loading plus SVG , Adobe Illustrator , AutoCAD PAT and SVGZ files efficiently , These types of files are loaded as the textures within 3Ds Max .

So , 3Ds Max 2014 has introduced diversification to design 3D CAD modeling services , 3D Architectural rendering services and animation , It assists Modelers , Renderers and the other users in improving their efficiency effectively.

3ds Max is a digital content creation software , It can create 3d printable parts in the computer that can replace a part of human organ or sophisticate engineered device ,  We can create group of robots that can attack other group of robots based on a cartoon show to pull off a feature films using Max .

UV Mapping is more difficult to achieve ( It requires a separate Modifier ) , It isn’t cross-platform ( It is Windows only software ) , It can leak in completeness , It does not have things that Maya has ( above all animation tools ) .