The NEO & EOS platforms can process transactions speedily and can be used in creating dApps as well as smart contracts, While the EOS project is mainly focused on the digital world of dApps, NEO, on the other hand, seems to be more focused on digitizing the financial world with powerful digital identities and putting them on the blockchain, However, none of them is yet at their full potential; the future looks bright for them.

EOS is a decentralized, blockchain-based technology that was designed to host & support decentralized applications (dApps) on a commercial scale, It is open-source software that was built on the Ethereum blockchain by the Block.one Company registered in the Cayman Islands, The EOS is designed to be self-sufficient & evolutionary, The current inflation rate every year is 5%, which will be used in paying miners for validating transactions & for further developing the network.

Like Ethereum (ETH), EOS enables developers to build dApps through smart contracts & most importantly, to offer a solution to the scalability problem currently plaguing most cryptocurrencies, like Bitcoin, EOS is popularly touted as “Ethereum Killer”, It uses the delegated Proof-of-Stake (DPoS) consensus algorithm to eliminate transaction fees and it’s expected by its developers to process millions of transactions every second, but Ethereum processes around 15 transactions/second.

The EOS.IO & the EOS tokens are the two key elements in the EOS ecosystem and a lot of people have used them interchangeably, however, both are distinctly different from each other, EOS.IO is open software, closely akin to the operating system of a computer, It incorporates blockchain architecture that is designed to enable vertical & horizontal scaling of dApps. 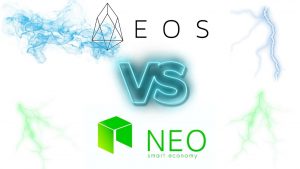 The native EOS token is the cryptocurrency that powers the EOS.IO blockchain protocol, EOS is the first blockchain network to be built on the EOS.IO software, EOS which started out as an ERC-20 token, raised over $4 billion in a year-long Initial Coin Offering (ICO), thus adding to its popularity.

EOS was among other digital coins that were badly affected in 2018 when the bear market kicked in with vengeance, investing in EOS now has good opportunities to pay off, It’s one of the leading cryptocurrencies on the market, EOS has successfully left Ethereum behind to take charge of the dApp space, Breaking down the top 30 dApps, the EOS network dominates 22 of them, EOS has retained its first position in the latest Chinese government ranking of public blockchain projects.

What is Delegated Proof of Stake (DPoS)?

Delegated Proof of Stake (DPoS) is a consensus algorithm that leverages the power of stakeholder approval to vote for a pool of delegates, in addition to the algorithm, that is responsible for validating transactions in few seconds and adding them to the shared ledger of a blockchain.

Invented by Daniel Larimer, Delegated Proof of Stake is advantageous when compared with the popular Proof-of-Work (PoW) consensus algorithm, because it is cheaper, faster, It saves energy costs and also promotes decentralization.

Using parallel processing technology, EOS performs speedy & validated transactions, thus beating the Bitcoin & Ethereum networks, Its developers have proven that it can handle millions of transactions every second, Instead of having to hard fork, the EOS network upgrades each time there is a software upgrade, Also, if a dApp is buggy, it can be frozen by block producers until the issue is fixed.

EOS is designed in such a way that ICOs can be hosted on the EOS network, This means that ERC20 tokens can be created on top of the blockchain, EOS is the first to have a governance structure or a constitution that every EOS token holder agrees to, While they are attached to every block mined, these set of rules can be modified if the need be, by any eligible stakeholder via voting processes.

With all of those aforementioned features & advantages, the EOS platform is not without disadvantages, When it comes to competition, EOS has a lot of competitors besides Ethereum, Networks such as NEO, RChain, Rootstock, and RSK are contending with EOS, While there is more room for more than one successful platform, EOS must stay ahead if it wishes by continuously stepping up its game.

Since EOS was designed to rely on only 21 block producers to confirm all transactions, some have argued that the network is more centralized than Ethereum and some other cryptocurrencies, while EOS depends on voting by stakeholders, low voter turnout could lead to further centralization, some are concerned about the fact that regular users are unable to audit the network unless they plan on doing so by personally running a full node.

There are so many similarities between EOS vs NEO as both platforms try to kill Ethereum, EOS blockchain is the most used in the world, It is the first blockchain with the most daily active users as 7800000 operations were performed in just 24 hours, EOS secures the first position on China’s CCID Blockchain Ranking.

The race for massive adoption is on between these two platforms, NEO vs EOS, both are quite popular platforms with large followers in the crypto community, While China tightens its grip on cryptocurrencies, NEO has been favorably looked upon by the Chinese government, so, contributing to its growth & adoption of the NEO ecosystem.

The vision of NEO is to create a friendly blockchain for the transition of what they call the Smart Economy, NEO seeks to use high-performance computing to advance consensus algorithms & to use the NEO blockchain network as a problem-solving platform, Their goal is to have the ability to operate commercial applications on a large scale, NEO operates on the principle that transactions should be free of charge for users.

EOS is pretty much the same, its vision is to build a complete decentralized operating system that is capable of supporting thousands of industrial-scale dApps, EOS aims to securely & smoothly handle high-speed transactions per second, Like NEO, they operate under the philosophy that transactions should be without cost.

When it comes to speed & scalability of NEO vs EOS, both have always been among the fastest when compared to other projects, While EOS scalability is estimated between twenty thousand to one million transactions per second, NEO’s blockchain currently supports one thousand tps & has a theoretical throughput of ten thousand tps with plans that the platform will be able to support 100.000 tps by 2020 with the Trinity Network protocol.

Sending transactions on both networks comes with no cost for regular users, as businesses foot the bill, NEO & EOS businesses face an upstart cost to key into the ecosystem, although this cost is variable on EOS, depending on the decentralized application, NEO coin is fixed & expensive.

While NEO uses dBFT, EOS utilizes the DPOS, the consensus mechanism invented by Dan Larimer, He later opted for an advanced version of EOS consensus protocol, the DPoS+BFT (Delegated Proof of Stake + Byzantine Fault Tolerance), Both systems are designed to combat up to a 66% attack, both coins are good for investment, so, you can buy both to build a diversified long-term portfolio, They can complement each other well because they are popular in different regions.

The differences between NEO & EOS

NEO is going in the direction of creating a “Smart Economy” by digitizing traditional real-world assets via digital identity, smart contracts as well as dApps, EOS is headed towards building a blockchain dApp platform that can be highly scalable, flexible, and usable.