NEO is a cryptocurrency, It is based on a blockchain platform, It was designed to create a network of the decentralized applications which is scalable, The NEO token is considered the base asset for the NEO blockchain, It generates the GAS tokens which is normally used to pay for the transaction fees which are generated by the applications on the NEO network.

NEO is open source, It has two core developers & they have done a lot of work with digital assets, The NEO coin has high certainty, high scalability, and compatibility across various application platforms, It supports the fast development and the deployment of smart contracts & projects because there is no need for the developers to learn a new programming language.

The digital identity is a great feature of the NEO cryptocurrency which is highly beneficial in order to increase the integrity of the transactions, The NEO network can support a huge range of the programming languages which are commonly used, The GAS which was formerly known as the ANG-Antcoins is another crypto-token of the NEO other than the NEO cryptocurrency.

The NEO has been ranked among the top ten best cryptocurrencies in the market, The NEO is expected to rise above 75 dollars in the future, It is a great project with potential possibly equal or more than the Ethereum, It is a strong competition to the Ethereum because the NEO allows the developers to use any programming language rather than learning a new one. 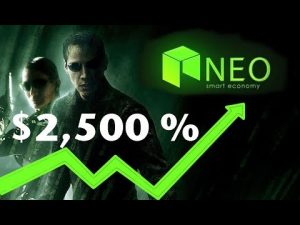 The price of the NEO went from $6 to $52 in just a night which made it reach the top 5 market cap, At present, it is ranked among the top 15 cryptocurrencies in the market., The NEO project was initially launched in the year 2014 as the AntShares in which the development resources were made available by the founder Erik Zhang and Da Hongfei, They later launched the Onchain which offers the blockchain consulting services.

NEO is the platform that has been touted as “Chinese Ethereum”, immediately garnering a great deal of attention from the crypto world, the NEO blockchain platform and the allied crypto coin that comes with it does a lot that is similar to Ethereum, like hosting dApps, smart contracts & more, The use of smart contracts is an important feature which sets the NEO platform apart from the bitcoin.

The indivisible units of the NEO and the smallest unit of the NEO are always 1 share, These shares are not capable for a division like the other coins such as the bitcoin, The NEO can’t be divided into a fraction, This might serve as a problem when the value of the NEO increases, the exchanges have made their own methods for the division of the NEO coins.

Although the GAS tokens can be bought & sold on various exchanges, the users are more likely to buy the NEO coins, This is because this will represent the stake of the user in the future of the NEO platform, Although the users are holding the NEO coins in their wallets, they start generating the GAS coins automatically, This is quite similar to the Ethereum but it very different from the mining process in the bitcoin.

The NEO platform is suitable for the ICO by letting the projects to launch the NEO coins on its platform, Having a quantum secure feature which is computer proof makes the NEO platform ready for future technology, The NEO is ready for the cryptography which is quantum-resistant The NEO Cryptocurrency has a notable transaction speed and it can handle as much as 10000 transactions every second, It can handle mainstream applications.

NEO can be written using languages like C+ and Java with Python and Go support soon on the cards, so, it becomes easy for more and more blockchain developers to join the bandwagon, Writing smart contracts on Ethereum requires one to know Solidity, a slightly more complicated language, so, NEO is a more accessible platform for developers.

NEO has the delegated Byzantine Fault Tolerance System or dBFT that is an improved upon its inspiration Ethereum’s Proof of Work consensus protocol, The dBFT is more energy-efficient consensus mechanism than most of the older consensus mechanisms & this factor seems to give NEO an edge, NEO can process roughly 1000 transactions each second, This high speed gives it an extremely high degree of efficiency which is capable of boosting adoption.

NEO lack popularity among a Western Audience, NEO has taken on a mighty competitor like Ethereum that already has a loyal user base and an established reputation, new competition is coming up every now & then, That makes NEO’s struggle for survival more acute, In such a backdrop, we wonder if simply having blockchain smart contracts and dApps would cut it.

The Neo Cryptocurrency takes a lot of time for the blockchain to synchronize with the customer or the client, While transferring the coins from the exchange can take a lot of time to appear, Everyone is fighting to be root chain, there can be many root chains, I don’t think there needs to be just one going forward but there is not going to be 20 root chains in the future, Most companies and services will decide to use one and adopt it, so, NEO could be thrown to the side if no one decides to build on it.

Legislative unknowns should make NEO be approached with caution as well as all currencies built in the very strict governmental system of China, Anything that takes away power from governments is going to have friction, without partnerships, NEO will be nothing, Neo has stolen ADX from ETH and that is a huge statement, China is the largest market and they will be more apt to support NEO than ETH.

The NEO vs the GAS

The NEO and the GAS tokens are native to the NEO platform were designed to serve different purposes, The ownership of the new blockchain is represented by the NEO tokens, The NEO tokens can be used to manage the NEO network and create the blocks, When a user holds a NEO token in their wallet, they are rewarded with the GAS tokens.

The right to use the NEO blockchain is given by the GAS tokens, The GAS token is used as fuels in order to power the transactions in the NEO network, It serves the same purpose as the ether serves to the Ethereum network.

The Difference between the NEO and the Onchain

The NEO & the Onchain are entirely separate entities, they are in existence independently, No one owns the other one, The NEO focuses on the B2C segment while the Onchain targets the B2B services of an enterprise, They both are funded separately, The NEO is funded by the public community, Whereas the Onchain community is funded by Fosun.