Types of speed & Factors necessary for the description of motion

The motion is the change of the object’s position (location) as the time passes according to the location of another object, The motion happens all around us, We see the objects such as the cars, the people and the balls move in different directions with different speeds every day.

When the object’s position changes as the time passes according to the position of another object, We can say that the object is in a state of motion, the path of a moving object may be straight, curved, or combination of both.

We can describe the motion of some objects around us as fast and some others as slow, The speed is a physical quantity which is used to describe and measure the motion of objects, (Speed = distance/ time). 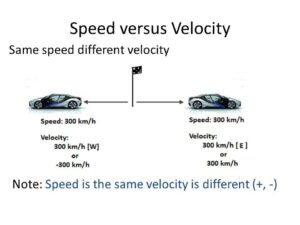 The speed is the distance moved through a unit time, the object’s speed increases as the time decreases to cover the same distance, The speed of the object is inversely proportional with the time.

It is difficult to determine the amount of irregular speed of the object, So, we use the average speed which is the total distance covered by the moving object divided by the total time taken to cover this distance.

The average speed represents the regular speed by which the moving object moves to cover the same distance at the same period of time.

If the observer is moving in the opposite direction of the moving object, So, (The relative speed = the object’s speed + the observer’s speed).

The wave motion and the types of waves