Motion is a change in the position of an object over time relative to a reference point. Motion happens all around us. Every day, we see objects such as cars and motorbikes move in different directions at different speeds. When the object’s position changes as the time passes according to the position of another object, we can say that the object is in a state of motion.

Applications on relative motion in our life

The motion of objects is divided into two types which are Transitional motion and Periodic motion. Transitional motion is the motion in which the object’s position is changed relative to a fixed point (or a fixed frame of reference) from time to time between initial and final positions. Examples: a person motion, a bicycle motion and train (or car) motion.

Periodic motion is a motion that is regularly repeated at equal periods of time. Examples: A vibrating motion (as the motion of the simple pendulum), A circular motion ( as the Moon around the Earth), and a wave motion ( as the motion of water waves [produced after throwing a stone (or a cork piece) in water]. The movement of the fan arms is a circular periodic motion because it is regularly repeated in equal periods of time. 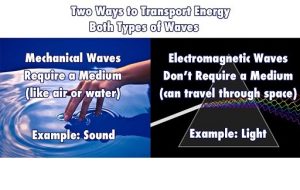 Electromagnetic waves are waves accompanied by electromagnetic forces and they don’t need a medium to travel through. They can spread in all media and free space. Their speed is extremely high equals 300 millions m/sec. Examples: Light waves, Microwaves, Radio waves, X-rays, Gamma rays, Ultraviolet and infrared rays (which are emitted from the Sun).

Some technological applications of electromagnetic waves:

The ultraviolet rays, X-rays and gamma rays are used in medical purposes. Infrared rays and visible light are used in photography. Remote sets don’t need a medium to control operating the electrical appliances because remote sets work by infrared rays (electromagnetic waves) which can travel through space. X-rays are used in examining mineral raws in the industry to show errors, pores & cracks in these minerals.

The wave motion and the types of waves