When a force ( F ) acts on a body of mass ( m ) moving at speed ( v ) in a circular path of radius ( r ) normally to the direction of its motion , The magnitude of velocity ( v ) remains constant along its path , The direction of velocity changes from one point to another on its path .

Finding the value of the centripetal acceleration

If a body moves from point ( A ) to point ( B ) , the velocity ( v ) changes in direction but maintains a constant magnitude . 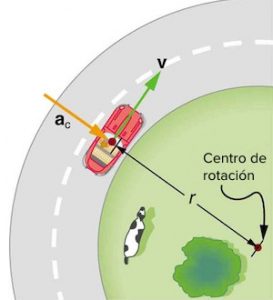 Factors affecting the centripetal acceleration ( a ) :

Finding the tangential linear velocity : If the body complete one circular revolution in an interval of time ( T ) which is called the periodic time , Periodic time is the time taken by the body to make one complete revolution .

It is known that the value of the angle in radian equals the ratio between the arc length and the radius of the path .

Finding the Centripetal Force ( F ) , According to Newton’s Second Law , the force is given by the relation :

The object mass : Centripetal force is directly proportional to the object mass at constant tangential velocity and radius of circular path .

It is necessary to calculate the centripetal force when designing the curved roads and railways in order to keep cars and trains moving along this curved path without skidding out .

If a car moves in a curved slippery road , the frictional forces may not be sufficient to turn the car around the curve , So , the car skids out the road .

Engineers define certain velocities for vehicles when moving in curves , If the vehicle velocity exceeds the predetermined velocity , the vehicle needs more more centripetal force to be kept in this curved path where F α v² .

It is forbidden for trucks and trailers to move on some dangerous curves , As the vehicle mass increases , it needs more centripetal force where F α m .

Slowing down in dangerous curves is a must to avoid accidents , As the radius of curve decreases the car needs more centripetal force to turn around , where F α 1/r .

When moving a bucket half filled with water in a vertical circular path at sufficient speed , the water does not spill out from the opening of the bucket because :

The centripetal force acting on water is normal to the direction of its motion , This force changes the direction of velocity without changing its magnitude to keep water inside the bucket rotating in a circular path .