It starts in the cells that make up the bones, It starts when the cells in the body begin to grow out of control, It is the malignant (cancerous) tumor of the bone which destroys the normal bone tissues, The primary and metastatic bone cancers are treated differently and have a different prognosis.

The malignant tumors that begin in the bone tissue are called the primary bone cancer, cancer that metastasizes to the bones from the other parts of the body like the breast, the lung, or the prostate is called metastatic cancer, and it is named for the organ or the tissue in which it began.

Both the malignant and the benign bone tumors may grow and compress the healthy bone tissue but the benign tumors do not spread, they do not destroy the bone tissue, and they are rarely a threat to life, The primary bone cancer is far less common than cancer which spreads to the bones. 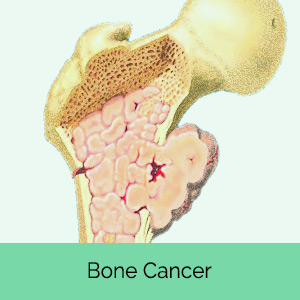 Cancer can begin in any type of bone tissue, The bones are made up of the osteoid (hard or compact), the cartilaginous (tough, flexible), and the fibrous (threadlike) tissue, as well as the elements of the bone marrow (soft, spongy tissue in the center of most bones).

The popular types of primary bone cancer include Osteosarcoma that arises from the osteoid tissue in the bone, It occurs in the knee and upper arm, The Ewing Sarcoma Family of Tumors ( ESFTs ) that occur in the bone but may arise in the soft tissue (the muscle, the fat, the fibrous tissue, the blood vessels, or the other supporting tissue).

The scientists think that ESFTs arise from the elements of the primitive nerve tissue in the bone or the soft tissue, ESFTs occur along the backbone and the pelvis and in the legs and the arms, The other types of cancer which arise in the soft tissue are called the soft tissue sarcomas, and they are not bone cancer.

The chondrosarcoma begins in the cartilaginous tissue, The cartilage pads the ends of bones and lines the joints, It occurs most often in the pelvis (It is located between the hip bones), the upper leg, and the shoulder, Sometimes the chondrosarcoma contains the cancerous bone cells, So, The doctors classify the tumor as an osteosarcoma.

Bone cancer does not have a clearly defined cause, Osteosarcoma takes place due to the external radiation therapy high-dose or the treatment with some anticancer drugs.

Osteosarcoma occurs most commonly between the ages 10 and 19, people over the age of 40 who have other conditions such as Paget disease (the benign condition characterized by the abnormal development of new bone cells).

The children seem to be particularly susceptible, The small number of bone cancers are due to heredity, The children who have had hereditary retinoblastoma are at a higher risk of developing osteosarcoma, particularly if they are treated with radiation.

The people who have the hereditary defects of the bones and the people with the metal implants that the doctors sometimes use to repair the fractures are more likely to develop osteosarcoma, The primary bone cancer is rare, It accounts for much less than 1 percent of all cancers.

Signs and symptoms of bone cancer

Pain is the most popular symptom of bone cancer but not all bone cancers cause pain, The persistent or unusual pain or swelling in or near the bone can be caused by cancer or by other conditions.

The pain in the affected bone is the most popular complaint of patients with bone cancer, the pain is not constant, It may be worse at night or when the bone is used (the leg pain when walking), When cancer grows, The pain increases with the activity and the person might limp if the leg is involved.

The swelling in the area of the pain may not occur until weeks later, It might be possible to feel the lump or the mass depending on the location of the tumor, The cancers in the bones of the neck can cause the lump in the back of the throat that can cause trouble in swallowing or it can make it hard to breathe.

The bone cancer may weaken the bone but the bones do not fracture (break), The people with the fracture next to or through the bone cancer usually describe the sudden severe pain in the limb that had been sore for a few months.

There are other symptoms, cancer in the bones of the spine can press on the nerves, leading to numbness and tingling or even weakness, Cancer can cause weight loss and fatigue.

The treatment options depend on the type, the size, the location, and the cancer stage, The person’s age, the general health, The treatment options for bone cancer include surgery, chemotherapy, radiation therapy, and cryosurgery (It is the use of liquid nitrogen to freeze and kill the cancer cells, It can be used instead of the conventional surgery to destroy the tumor).

The surgery is the usual treatment for bone cancer, The surgeon removes the entire tumor with negative margins, The surgeon may use special surgical techniques to decrease the amount of healthy tissue removed with the tumor.

The dramatic improvements in the surgical techniques and preoperative tumor treatment have made it possible for most patients with bone cancer in an arm or leg to avoid radical surgical procedures (removal of the entire limb), most patients who undergo limb-sparing surgery need reconstructive surgery to maximize the limb function.

The radiation therapy is called radiotherapy, High-energy x-rays are used to kill the cancer cells, This treatment may be used in combination with the surgery, It is used to treat the chondrosarcoma that cannot be treated with chemotherapy, as well as ESFTs, It may be used for the patients who refuse the surgery.