The movement of the body depends on three main systems that are coordinated together which are skeleton system, nervous system & muscular system, Skeleton system represents a suitable place for the attachment of muscles, It supports the moving of limbs, the joints have an important role in the movement of different body parts.

Movement in man (as an example for mammals)

The number of body muscles in man is about 620 muscles or more, The muscles enable the different parts of the body to move, so, the man can move from a place to another and perform his mechanical movement.

The skeletal muscle consists of a large number of thin filaments called muscular cells or muscle fibers, The muscle fibers are always found in groups that known as muscle bundles that are surrounded by a bundle membrane. 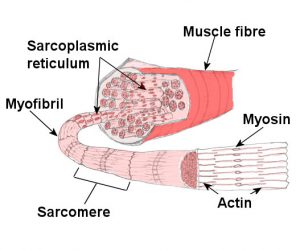 Each muscle fiber consists of:

Each myofibril consists of :

The sarcomere is the distance between each two successive Z-lines and found in the middle of light bands, It is the smallest contraction unit in the skeletal muscle.

Muscles are responsible for the movement of the body, because of their ability to contract and relax, causing the motion.

A potential difference is formed, due to the difference in ions concentration outside and inside the muscle fiber membrane which is called polarization state.

The stimulus that causes the skeletal muscle contraction is considered the arrival of nerve impulses from the brain and spinal cord through the motor nerve cells which their terminals arborizations are connected firmly with the muscle fiber, forming a neuro-muscular junction, The synapse has synaptic vesicles that contain neurochemical transmitters as acetylcholine.

After a part of second, the potential difference of muscle fiber membrane returns to its normal state repolarization, due to the action of cholinesterase enzyme that found in a large amount at the neuro-muscular junction points which destroy the acetylcholine into choline and acetic acid, so, its action stops , its effect vanishes and the membrane permeability to ions returns to its original state (resting state) being ready to receive and respond again to the stimulus.