Side effects of Chemotherapy after the surgery to remove cancer

The chemotherapy is the use of drugs to kill the cancer cells, It may be used alone or in the combination with the other treatments such as the surgery and the radiation therapy, depending on the tumor type and the extent of disease, Unlike the surgery, the treatment with the chemotherapy can be a long-term process with multiple courses of therapy given over time.

This schedule can lead to longer periods of weakness and it may affect the older adult with cancer in different ways than the younger people, For example, The older adults are at greater risk for the experiencing physical side effects from the chemotherapy which influences their quality of life.

When cancer has spread beyond the pancreas to the other parts of the body (the advanced or metastatic pancreatic cancer), on its own or in the combination with the radiotherapy, The chemotherapy drugs can be used in several different ways. 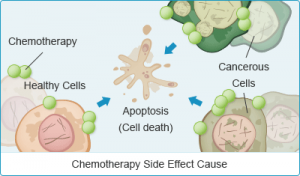 Chemotherapy Side Effects Cause

Side effects of chemotherapy

Unlike the radiation therapy and the surgery, The chemotherapy affects the entire body that increases the risk of side effects, Not all the drugs have the same side effects , they occur more often in older adults, The harmful reactions from chemotherapy are the only reason for about 10% of all hospital admissions for older people with cancer.

The side effects of chemotherapy include the lowered white blood cell, red blood cell, and platelet counts that can increase the risk for the infection , the anemia (a decrease in the red blood cells), bleeding, and bruising, The Stomach and the intestinal problems such as the nausea, the vomiting, the diarrhea, and the dehydration.

The most important side effect is the impact on your blood count, The chemotherapy can affect the bone marrow that produces the blood cells, So, It will cause the low levels of the red blood cells (anaemia) that can make you very tired and it sometimes makes you breathless.

The chemotherapy can damage the nervous system that may further weaken the person’s mental capacity (such as thinking or judgment the abilities), It can increase memory loss, and cause the fatigue and the nerve damage, It can cause screening for any health problems before starting the treatment and adjusting the dose or the type of the drug during the treatment often minimizes these side effects.

The symptoms may include the swelling, the redness or the pain in your arms or legs, or the shortness of breath (if the clot is in your lungs), The blood clots are dangerous but they can usually be treated successfully.

Chemotherapy after surgery to remove cancer

If someone has had the surgery to completely remove cancer, This form of chemotherapy is called the adjuvant chemotherapy, It aims to try to reduce the chances of cancer coming back, The drug most used after the surgery to remove cancer is gemcitabine, Capecitabine can be used, 5-fluorouracil (5-FU) can be an alternative treatment option.

Your wound should be healed, with no signs of infection, You have to be able to eat and drink well, and your bowels should be working normally, The chemotherapy will usually start within 12 weeks of the surgery, and it will be planned to be given for six months.