There are signs and symptoms which are a new lump, abnormal bleeding, prolonged cough, unexplained weight loss, and the change in bowel movements among others, While these symptoms may indicate cancer, they may occur due to other issues, and over 100 different cancers affect the humans.

Cancer happens when the cells that are not normal grow and spread very fast, The normal body cells grow and divide and know to stop growing, They also die, Unlike these normal cells, cancer cells just continue to grow and divide out of control and they don’t die when they are supposed to.

Cancer cells usually group or clump together to form tumors, The growing tumor becomes the lump of cancer cells which can destroy the normal cells around the tumor and damage the body’s healthy tissues, and it can make someone very sick.

Cancer cells sometimes break away from the original tumor and they travel to the other areas of the body, where they keep growing and they can go on to form new tumors, This is how the cancer spreads, The spread of the tumor to the new place in the body is called the metastasis.

Cancer is not one disease but it is the large group of almost 100 diseases, There are two main characteristics which are the uncontrolled growth of the cells and the cells can migrate from their original place and spread to distant sites in the human body, If the spread is not controlled, cancer can result in the death. 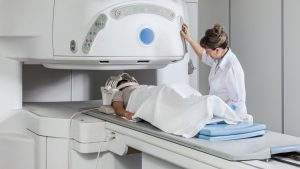 Radiation therapy causes the death of a large proportion of cancer cells within the entire tumor, The radiation alone may be used to cure certain small tumors, It causes the death of the microscopic disease at the periphery of the tumor (e.g. at the time of surgery), and it can shrink the tumors (which may help to relieve the mass effect).

Radiation therapy causes relative safety for the patient, It is painless, and generally does not require anesthesia, It causes the synergy with systemic therapy (It can kill more cells together), It helps in the organ preservation, It is stimulation of an immune response against the tumor, It will take about 15-30 minutes and you do not need to stay in the hospital.

Radiation therapy causes damage to the surrounding tissues (e.g. the lung, the heart), depending on their proximity to the tumor, It can not kill the tumor cells that can not be seen on the imaging scans and they are not included in the 3D models of the radiation planning, The radiotherapy and some types of the chemotherapy can cause the people to lose their hair.

Radiation therapy has the inability to kill all cancer cells in the tumors (this is true in particularly large tumors), It has the inability to relieve the mass effect (i.e. pushing of the tumor on surrounding normal structures) in certain parts of the body such as the brain, and the thereby requires the surgery.

Radiation therapy causes poor killing of cancer cells in the areas that do not have a good oxygen supply (e.g. in the area after the surgery, in the limb with poor blood supply), It causes an increased incidence in the wound complication and poor healing (e.g. if the surgery is used after the radiation or in the parts without good circulation).

What are the different signs, symptoms, and stages of cancer?