It is also known as the lung carcinoma, It is the malignant lung tumor characterized by uncontrolled cell growth in the tissues of the lung, if it is left untreated, It can spread beyond the lung by the process of the metastasis into nearby tissue or the other parts of the body.

The lung cancer is a cancer type which begins in the lungs, The people who smoke have the greatest risk of the lung cancer, The lung cancer risk increases with number of cigarettes and the length of time you have smoked, You can prevent the lung cancer by avoiding the risk factors including smoking and the air pollution.

The vast majority (85%) of the lung cancer cases are due to the long-term tobacco smoking, About 10–15% of cases of lung cancer occur in the people who have never smoked, These cases are caused by a combination of the genetic factors and exposure to radon gas, asbestos, second-hand smoke, or the other forms of air pollution. 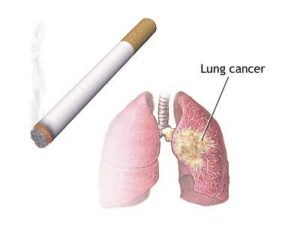 The symptoms of lung cancer may include a new cough which does not go away, Changes in a chronic cough or the smoker’s cough, Coughing up blood or the rusty-colored phlegm, even a small amount, the fatigue, The chest pain, the unexplained weight loss and loss of appetite.

The pain in the chest area is the symptom in about one fourth of people with the lung cancer, The pain is dull, aching, and persistent, The shortness of breath usually results from the blockage in part of the lung, collection of fluid around the lung (pleural effusion), or the spread of tumor through the lungs.

The symptoms include wheezing or hoarseness that may signal blockage or the inflammation in the lungs which may go along with cancer, The repeated respiratory infections such as the bronchitis or the pneumonia can be a sign of the lung cancer.

If the lung cancer spreads to the distant organs, It may cause the bone pain (like the pain in the back or hips), Nervous system changes (such as a headache, the weakness or numbness of an arm or leg, dizziness, balance problems, or seizures), the cancer spread to the brain or spinal cord.

If the lung cancer spreads to the distant organs it may cause yellowing of the skin and eyes (jaundice), from cancer spread to the liver, The lumps near the surface of the body due to cancer spreading to the skin or to the lymph nodes such as those in the neck or above the collarbone.

Risk factors due to lung cancer

The risk factors for the lung cancer include smoking, and the exposure to radon gas that is produced due to the natural breakdown of uranium in the soil, the rock and the water that becomes part of the air you breathe.