Cigarette components, What are the bad effects and health risks of smoking?

Smoking is one of the biggest causes of death and illness, It harms nearly every organ of the body and affects the person’s overall health, It causes about 90% of the lung cancers, and it also causes cancer in many other parts of the body.

The tobacco can damage the woman’s reproductive health and it hurts the babies, The tobacco use is linked with reduced fertility and a higher risk of the miscarriage, the early delivery (premature birth), and stillbirth. The tobacco causes the low birth-weight in the infants, It has been linked to a higher risk of birth defects and sudden infant death syndrome (SIDS) too.

Smoking can cause the ectopic pregnancy in the women, It occurs when the fertilized egg implants somewhere other than the uterus, So,  the egg can’t survive, and if left untreated, it can be life-threatening for the mother, Smoking also causes reduced fertility, It makes it more difficult to get pregnant.

The cigarettes contain more than 4000 chemical compounds and at least 400 toxic substances, When you inhale, The cigarette burns at 700°C at the tip and around 60°C in the core. This heat breaks down the tobacco to produce the various toxins, as the cigarette burns, the residues are concentrated towards the butt. 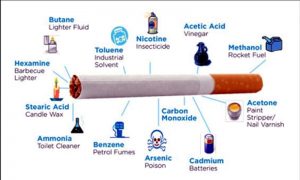 The cigarettes products that are most damaging the body such as the tar which is a carcinogen (a substance that causes cancer), the nicotine which is addictive and it may have the side effects including increasing the risk of atherosclerosis, high blood pressure & the heart disease, carbon monoxide which reduces oxygen in the body, and the components of the gas and particulate phases that cause the chronic obstructive pulmonary disease (COPD).

Smokers are more likely to get cancer than non-smokers, Tobacco causes lung cancer, throat cancer, and mouth cancer, which rarely affect the non-smokers. The more cigarettes you smoke in a day, and the longer you’ve smoked, the higher your risk of lung cancer, So, the risk rises, When the deeper you inhale and the earlier in the life you started smoking.

If you smoke, the risk of contracting the mouth cancer is four times higher than for a non-smoker, cancer can start in many areas of the mouth, It is most common on or underneath the tongue, or on the lips.

Smoking affects the smoker’s health, It harms nearly every organ of the body and it causes many diseases such as chronic bronchitis, the emphysema, the heart attacks, the strokes, and cancer, the male smokers may be more likely to be sexually impotent (have erectile dysfunction or ED) than non-smokers.

Smoking can cause the blockages and narrowing in your arteries which causes less blood and oxygen flow to your heart, as smoking affects your arteries, So, it can trigger stroke.

The stroke happens when the blood supply to your brain is temporarily blocked, The brain cells are deprived of oxygen and start to die, the stroke can cause paralysis, slurred speech, altered brain function, and death.

Smoking can make you go blind, as it damages your eyes and it can result in the vision loss, It causes age-related macular degeneration, It causes blindness in the adults’ ages 65 and older.