The thoracic cage is known as the human rib cage, It is a bony and cartilaginous structure, It surrounds the thoracic cavity and supports the pectoral girdle, forming a core portion of the human skeleton, It has 24 ribs, the sternum (with the xiphoid process), costal cartilages, and the 12 thoracic vertebrae. It, along with the skin and associated fascia and muscles, makes up the thoracic wall and it provides attachments for the muscles of the neck, thorax, upper abdomen, and back.

The thoracic cage serves to support the thorax, It has several functions, It can protect vital thoracic and abdominal internal organs from external forces, It can resist the negative internal pressures generated by the elastic recoil of the lungs and respiration-induced movements, It can offer attachment for and supporting the weight of the upper limbs, It can offer the anchoring attachment of many muscles that move and maintain the position of the upper limbs relative to the trunk.

The thoracic cage consists of the sternum, the ribs, and the thoracic vertebrae. It has a narrow inlet and a wide outlet.

Thoracic inlet (the upper opening of the thoracic cage) 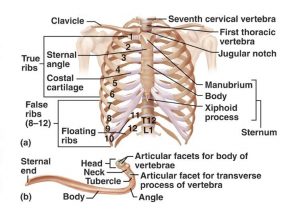 It is the lower opening of the thoracic cage.

Classification of the ribs according to their attachments to the sternum

There are twelve ribs on each side classified as:

The lower two ribs are called the floating ribs because they are free anteriorly.

Classification of ribs according to their structure

The typical rib is formed of (anterior end, posterior end, and a shaft), Anterior end: which is cup-shaped for articulation with its costal cartilage. Posterior end, formed by head, neck, and tubercle.

C: two inches from the tubercle, there is the angle of the rib. It has two surfaces inner surface which is the concave and the outer surface. Its upper border is smooth and its lower border is sharp and has the costal groove which is related to the inter-costal vein, artery, and nerve (VAN) from above downwards.

1. First rib (general features): It has upper and lower surfaces. Its upper surface is rough containing many grooves and elevations. It carries a small tubercle close to the inner border (scalene tubercle) for insertion of the scalenus anterior muscle. This tubercle separates two grooves, the one posterior to it is for the subclavian artery, and that anterior is for a subclavian vein.

2. Second rib: its shaft has no angel.

3. Tenth rib: It has a single articular facet on the head.

4 . Eleventh rib: It has a single articular facet on the head and no tubercle.