The lymphatic system drain tissue fluid, plasma proteins, and other cellular debris back into the bloodstream, it is also involved in immune defense, The lymphatic vessels of the head and neck can be divided into two major groups; which are superficial vessels & deep vessels, Superficial vessels drain lymph from the scalp, face, and neck into the superficial ring of lymph nodes, The deep lymphatic vessels arise from the deep cervical lymph nodes, They converge to form the left and right jugular lymphatic trunks.

Lymphatics of head and neck

It is formed of 2 main systems:

Called (Waldeyer’s ring) and formed of:

a. Along the midline includes:

b. Two lateral groups along the internal jugular veins, includes: 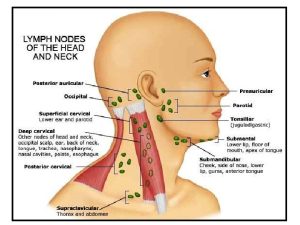 Lymphatics of head and neck

The branchial arches are six arches, which develop in a successive manner from above down-ward around the pharynx (e. the first arch will appear first, followed by the second followed by the third and so on).

Each arch receives a separate branch from the aorta to supply it, The artery supplying the fifth arch degenerates early, so the 5th arch itself degenerates too, Now there are 5 arches named according to their number: 1st, 2nd, 3rd, 4th and 6th arch.

The first arch is also called the mandibular arch, the second is termed the hyoid arch. Each arch is horse shoe-shaped and formed of an outer layer of ectoderm, inner layer of endoderm separated by an intermediate layer of mesoderm, Each arch has an artery, nerve cartilage, and muscular component:

The first or mandibular arch

It divides into small maxillary and large mandibular parts. Its nerve supply is the mandibular nerve. It contains cartilage called Meckle’s cartilage.

Derivatives of the first arch

It is supplied by the facial nerve. Its cartilage is called Reichert’s cartilage.

Derivatives of the second arch

It is supplied by the glossopharyngeal nerve.

Derivatives of the third arch

This arch is supplied by the external laryngeal nerve (branch of the superior laryngeal of the vagus nerve).

Derivatives of the fourth arch

It is supplied by the recurrent laryngeal nerve (branch from vagus nerve).

Derivatives of the sixth arch

Endodermal derivatives of the pharyngeal pouches

Four clefts are present between the branchial arches. They are lined by ectoderm, The first cleft penetrates the underlying mesoderm to form the external auditory meatus. The mesoderm of the second arch proliferates to form the operculum, This operculum grows caudally to overlap the third and fourth clefts. The operculum forms a space between it and the clefts. This space called cervical sinus. This sinus will disappear to give a smooth contour of the neck.