The stomach is the most dilated part of the alimentary canal. The stomach has two main functions; a secretory and a motor function. The two functions usually go in perfect harmony so that when secretion is stimulated, motility is also augmented. In the fed state, both secretion and motility are increased while in the fasting state, both are diminished.

Physiology of the stomach

Physiologically, the stomach can be divided into two major parts, the body, and the antrum. The fundus located at the upper end of the body of the stomach is actually a functional part of the body.

Functions of the stomach

The stomach has both motor and secretory functions. 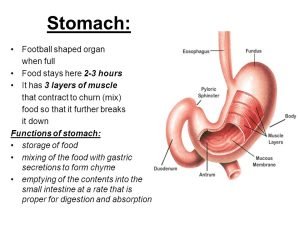 Functions of the stomach

Innervation of the stomach

The vagi supply preganglionic fibers which relay at the ganglia of the local nerve plexuses (Auerbach’s and Meissner’s) in the gastric wall. The vagi serve the following functions:

Sympathetic supply is along a branch of the greater splanchnic. Preganglionic fibres relay in the caeliac ganglia, and postganglionic fibers pass to the stomach along its arterial blood supply.

Sympathetic supply has the following effects

Mucous secreting cells line the entire surface of the stomach. The gastric mucosa also contains deep glands in the pyloric and cardiac regions. Many of the glands open on a common chamber (gastric pit) that opens in turn on the surface of the mucosa.

Human gastric secretion is about 3 liters/day. It is the most acidic secretion in the body with a pH of approximately 1. It contains:

It is secreted by the parietal cells of the gastric glands. HCI is formed at the intra-cellula membrane by ionic exchange, and is passed directly into the canaliculi. The most probable mechanism of HCI secretion is as follows.

1. Parietal cells exert electrochemical work to dissociate a molecule of water into H+ and OH−. Active transport of H+ across the membrane of the parietal cells to the gastric lumen occurs (proton pump). The energy for this active transport is derived from aerobic glycolysis, since acid secretion ceases under anaerobic conditions. Two molecules of H+ are secreted for each molecule of O₂ consumed.

2. CO2 from the blood enters the parietal cells where it reacts with water to form carbonic acid (H2CO3), catalyzed by carbonic anhydrase enzyme. Dissociation of H2CO3 into H+ and HCO3− occurs. H+ combines with the OH− produced in the first step forming H2O.

Secretion of HCI is directly proportional to the CO2 tension of blood: in hyperventilation, HCI formation is depressed. Diamox, a carbonic anhydrase inhibitor also depresses gastric secretion of HCI.

3. Bicarbonate (HCO3−) ions pass from parietal cells to the blood in exchange for chloride ions (CI−) that enter the cell. CI− ions are secreted by the parietal cells at the luminal side of the gastric mucosa by an active process against a relatively high concentration gradient and are coupled with the H+ ions produced in the first reaction, giving a strong solution of hydrochloric acid (HCI) in the canaliculus. The HCI is then secreted outward through the open end of the canaliculus into the lumen of the gland.

Blood coming from the stomach is alkaline, and has a high HCO3 content. When the gastric acid secretion is elevated after a meal, the pH of the systemic blood rises and alkaline urine is excreted. This is the probable explanation of the high pH of urine excreted after a meal, the “postprandial alkaline tide”.

Three types of receptors exist on the parietal cell membrane. When they are activated, they stimulate HCI secretion and potentiate the effect of other receptors. Maximum HCI secretion occurs when the three receptors are stimulated simultaneously.