The ankle is known as the talocrural region, It includes three joints: the ankle joint proper or talocrural joint, the subtalar joint, and the inferior tibiofibular joint, It is formed by three bones; the tibia and fibula of the leg, and the talus of the foot. The movements produced at this joint are dorsiflexion and plantar flexion of the foot.

The ankle joint is a synovial joint located in the lower limb, It is formed by the bones of the leg (tibia and fibula) and the foot (talus). It is the region where the foot and the leg meet, it is a hinge-type joint, It permits dorsiflexion and plantar flexion of the foot, as well as some degree of pronation and supination with subtalar and midtarsal joints. 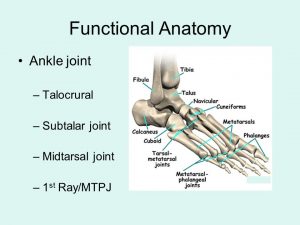 Large joints of the foot

The small joints of the foot

Arches of the foot

The foot has three arches: two longitudinal (medial and lateral) arches and one anterior transverse arch, They are formed by the tarsal and metatarsal bones and supported by ligaments and tendons in the foot. Their shape allows them to act in the same way as a spring, bearing the weight of the body and absorbing the shock produced during locomotion. The flexibility conferred to the foot by these arches facilitates functions such as walking and running.

Medial arch: The medial arch is the higher of the two longitudinal arches. It is formed by the calcaneus, talus, navicular, three cuneiforms, and first three metatarsals bones. It is supported by:

Lateral arch: The lateral arch is the flatter of the two longitudinal arches, and lies on the ground in the standing position. It is formed by the calcaneus, cuboid, and 4th sth and 5th metatarsals bones. It is supported by:

Transverse Arch: The transverse arch is located in the coronal plane of the foot. It is formed by the metatarsal bases, the cuboid, and the three cuneiform bones. It has:

Pes Cavus is a foot condition characterized by an unusually high medial longitudinal arch. Due to the higher arch, the ability to shock absorb during walking is diminished and an increased degree of stress is placed on the ball and heel of the foot. Consequently, symptoms will generally include pain in the foot, which can radiate to the ankle, leg, thigh, and hip.

Pes Planus (Flat Foot) is a common condition in which the longitudinal arches have been lost. Arches do not develop until about 2-3 years of age, meaning flat feet during infancy is normal. For most individuals, being flat-footed causes few, if any, symptoms. In children, it may result in foot and ankle pain, whilst in adults, the feet may ache after prolonged activity.

Structure of skeleton of the foot, Tarsals, Metatarsals and Phalanges