The anterior tibial artery begins at the lower border of the popliteus as the smallest terminal branch of the popliteal artery. It penetrates the upper part of the interosseous membrane to reach the anterior compartment of the leg. and it passes deep to the superior extensor retinaculum.

Through its course, it lies medial to the anterior tibial nerve. It ends in front of the ankle joint midway between the two malleoli, where it continues to the dorsum of the foot as the dorsalis pedis artery.

Dorsales pedis artery is the continuation of the anterior tibial artery in front of the ankle joint. It runs closely medial to the anterior tibial nerve. It passes deep to the inferior extensor retinaculum. At the proximal part of the first interosseous space, it passes to the sole of the foot by piercing the first dorsal interosseous muscle. In the sole of the foot, it ends by anastomosis with the end of the plantar arch. 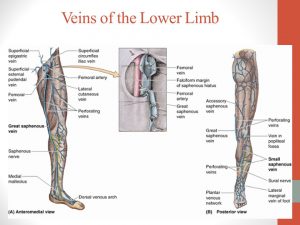 Veins of the Lower Limb

It is the largest terminal branch of the popliteal artery.

Arteries of the sole of the foot:

The medial plantar artery is the smaller of the terminal branches of the posterior tibial artery. It arises beneath the flexor retinaculum. It ends by supplying the medial side of the big toe. Branches: Muscular, cutaneous, and articular branches.

The lateral plantar artery is the larger of the terminal branches of the posterior tibial artery. It arises beneath the flexor retinaculum. On reaching the base of the fifth metatarsal bone, the artery curves medially to form the deep plantar arch, and at the proximal end of the first intermetatarsal space joins the dorsalis pedis artery. Branches: muscular, cutaneous, and articular branches.

Major branches of the deep plantar arch include:

The cruciate anastomosis is situated at the level of the lesser trochanter of the femur and, together with the trochanteric anastomosis, provides a connection between the internal iliac and the femoral arteries. The following arteries take part in the anastomosis: the inferior gluteal artery, the medial femoral circumflex artery, the lateral femoral circumflex artery, and the first perforating artery, a branch of the profunda artery.

Anastomosis around the knee

Veins of the lower limb

Superficial veins of the front of the thigh

It is the continuation of the popliteal vein at the adductor opening.

Course: It continues in the adductor canal, then in the femoral triangle. It terminates as the external iliac vein after passing behind the inguinal ligament medial to the femoral artery.

It starts at the lateral side of the dorsal venous arch and the lateral margin of the foot. It runs up in the subcutaneous fat posterior to the lateral malleolus (accompanied by the sural nerve) to the middle of the calf where it usually pierces the deep fascia and ascends to the popliteal fossa where it ends in the popliteal vein. It communicates with the great saphenous vein by many channels.

Veins of the foot

There are interconnected networks of deep and superficial veins in the foot. The deep veins follow the arteries; superficial veins drain into a dorsal venous arch on the dorsal surface of the foot over the metatarsals.

Lymphatics of the lower limb

The lymphatics of the lower limb are classified into two main groups:

The deep inguinal lymph nodes drain into the ” external iliac lymph nodes” through the lymphatics which accompany the femoral vein deep to the inguinal ligament.