Blood vessels of the lower limb

The blood drains the lower limbs from the toes to the inferior vena cava, through deep & superficial veins, Deep veins begin with the toes’ digital veins, that drain into the plantar venous arch, which empties into the posterior tibial vein.

Arteries of the gluteal region 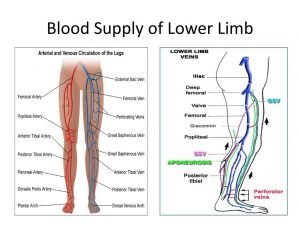 The superior gluteal artery is a branch from the internal iliac artery and it enters the gluteal region through the upper part of the greater sciatic foramen above the piriformis, It divides into branches which are distributed throughout the gluteal region.

Inferior gluteal artery is a branch of the internal iliac artery and it enters the gluteal region through the lower part of the greater sciatic foramen, below the piriformis, It divides into numerous branches which are distributed throughout the gluteal region.

Blood supply of the head and neck of the femur comes from 3 sources:

Femoral artery is the continuation of the external iliac artery at the mid-inguinal point. The artery descends across the femoral triangle to its apex, where it continues in the subsartorial (adductor canal). It terminates at the end of the adductor canal by passing through the adductor hiatus to continue as the popliteal artery.

Surface anatomy: It corresponds to the upper two-thirds of a line extends from the mid-inguinal point to the adductor tubercle when the thigh is flexed, abducted, and laterally rotated.

Branches of the femoral artery:

It arises from the posterolateral aspect of the femoral artery one and half inches below the inguinal ligament.

Popliteal artery is the continuation of the femoral artery at the adductor hiatus.