Joints of the lower limb

The bones of the lower limb consist of 30 bones which are the femur, patella, tibia, fibula, tarsal bones, metatarsal bones, and phalanges. The femur is the single bone of the thigh, The thigh is located between the hip joint & knee joint. 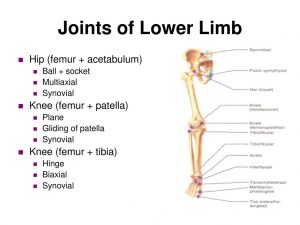 To the hip: the capsule is attached to the margins of the acetabulum and the transverse acetabular ligament.

Extracapsular: There are three extracapsular ligaments, and they are continuous with the outer surface of the hip joint capsule.

Vascular supply to the hip joint is achieved via the medial and lateral circumflex femoral arteries (from profunda femoris artery), and the artery to head of the femur (from obturator artery).

Stability of the hip joint

The hip joint is a very stable joint because the head of the femur fits accurately to the acetabulum and labrum acetabular, and due to the three-strong ligaments outside the capsule, and the surrounding strong muscles.

The synovial membrane lines the capsule and it is attached to the margins of the articular surface, It extends up beneath the quadriceps femoris muscle above the patella, forming the suprapatellar bursa, and the synovial membrane is reflected backward from the posterior surface of the ligamentum patellae to form the infrapatellar fold.

Structures inside the knee joint

Arterial supply of the knee joint: From the anastomosis around the knee.

Movements of the knee joint