The joint is the physical point of connection between two bones, Joints enable the bodies to move in many ways. Joints have many fibrous connective tissues. Ligaments can connect the bones to each other, Tendons connect the muscles to bones. Cartilages cover the ends of bones & provide cushioning. e.g. the knee joint connects between the femur (thigh bone) and the tibia (shin bone).

Joints are the point of meeting of two or more bones. Joints are divided according to the material separating the bones into fibrous, cartilaginous, and synovial joints. 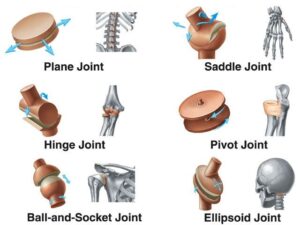 It is the point of meeting of two bones or more, and the bones are separated by fibrous tissue. There is no movement in fibrous joints.

The skull with irregular lines that represent the sutures, and a section of the skull showing the irregular serrated edges of the bone. An example of the peg and socket joint is the root of the teeth and the alveolar margin of the maxilla or mandible.

It shows the site of the joint which is also called the distal tibio-fibular joint. The joint is just above the ankle joint.

The bones are separated by cartilage.

The bones are separated by synovial fluid.

The joint moves around one axis.

The condylar joint is the articulation between two knuckles (projections) of one bone with two concavities (cavities) in another bone. Ellipsoid joint is one of the biaxial joints. An example is the radiocarpal joint (wrist joint).

The joint moves around two axes.

Ball and socket joint (Polyaxial joint). The example is the hip joint where the head of the femur articulates with the cup-shaped acetabulum of the hip bone.

The nerve supply of any joint comes from the nerves that supply the muscles acting on that joint. This is called “Hilton’s Law”.

Osteoarthritis is a common disease affecting the big joints especially in females. It is associated with the fragmentation of the articular cartilage.