Parathyroid glands regulate the calcium levels in our bodies, they are located behind the thyroid at the bottom of your neck, they are about the size of a grain of rice, they produce and secrete parathyroid hormone in response to low blood calcium, which plays an important role in regulating calcium in the blood & within the bones, Calcium is the most important element in our bodies, so calcium is regulated than any other element with the parathyroid glands.

Nerve supply: Sympathetic fibers are distributed from the superior and middle cervical ganglia of the sympathetic trunk, These fibers are not secretory to the gland because the parathyroid activity is controlled by the level of the blood calcium. 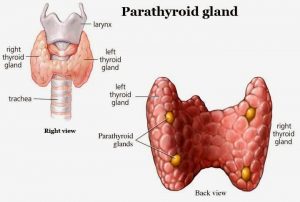 The thin CT capsule sends septa inside the gland, from which reticular fibers arise forming a network supporting the parenchymal cells, A rich network of fenestrated blood capillaries surrounds the cells.

It is formed of densely-packed cords of cells of two types, these are:

A. The chief cells:

By EM: The cytoplasm contains many mitochondria with abundant cristae which are the cause of eosinophilia observed by LM.

Parathormone (parathyroid hormone) is composed of 84 amino acid residues. It is synthesized as a 115 amino acid precursor molecule pro-PTH.

Mechanism of action of parathormone

Parathormone binds to a membrane receptor protein which appears to be identical in bone and kidney but found in non-target organs.

The effect of parathormone is the elevation of calcium ion concentration in the extracellular fluid and depression of phosphate concentration, so as to keep the solubility product constant (Ca x PO4 = constant). The parathormone produces its effects by the following actions on bones, gastrointestinal tract, and kidneys:

A) Effect on bones

It acts directly on the bone. It increases bone resorption and mobilization of calcium and phosphate to the blood. Such action occurs in two phases namely the rapid phase and slow phase:

B) Effect on the intestine

It enhances both calcium and phosphates absorption from the intestine indirectly by increasing the formation of 1.25 dihydroxycholecalciferol (1,25 DHCC) from vitamin D. PTH increases the activity of the 1α hydroxylase enzyme in the kidney.

1) Calcium ion concentration in the blood is the main factor for regulating the secretion of PTH in a negative feedback mechanism:

a) When plasma calcium is low, the secretion of PTH is increased within minutes, and if the decreased concentration persists, the glands will the (hypertrophy e.g. rickets, pregnancy, and lactation.

b) Any condition that increases the calcium ion concentration leads to decreased activity and reduced sizes of parathyroid glands such as:

Effects of hyposecretion of PTH (hypoparathyroidism)

Hypoparathyroidism will lead to:

When the extracellular fluid concentration of calcium ions falls below normal (8.5-10.5 mg/dl), the nervous system becomes more excitable because of increased neuronal membrane permeability to sodium ions. This increase in excitability occurs both in the central nervous system and in the peripheral nerves (including neuromuscular junction).

The nerve fibers become so excitable that they begin to discharge spontaneously, initiating nerve impulses that pass to the skeletal muscles causing spastic contraction Tetany).

It is a state of spastic contraction of skeletal muscles caused by increased neuromuscular excitability as a result of decreased calcium levels in the extracellular fluid below normal.

Types and manifestations of Tetany

It occurs if the plasma calcium level falls below 7 mg %. It occurs spontaneously during rest producing spastic contraction involving specially the muscles of extremities (carpo-pedal spasm), generalized convulsions may occur. In severe hypocalcaemia, tetany occurs so quickly that a person dies due to the contraction of some important muscles such as the laryngeal muscles leading to laryngeal stridor and death.

The plasma calcium level is about 7 mg % (7-9 mg %). This type of tetany does not occur spontaneously but it needs certain tests to provoke it:

Effects of hypersecretion of PTH (hyperparathyroidism):

Hyperparathyroidism will lead to:

In severe hyperparathyroidism, the bone resorption is markedly increased, so the bone is decalcified. Multiple fractures can result from slight trauma. Radiographs of the bone show that the bone may be eaten away and filled with multiple cysts (Ostitis fibrosa cystica).