Antibacterial drugs are derived from bacteria or molds or are synthesized de novo, “antibiotic” refers to antimicrobials derived from bacteria or molds but it is used synonymously with “antibacterial drug,” Antibiotics have many mechanisms of action, such as inhibiting cell wall synthesis, Increasing cell membrane permeability, Interfering with protein synthesis, nucleic acid metabolism, and other metabolic processes (eg, folic acid synthesis).

Many antibiotics are related and are grouped into classes, Although drugs within each class share structural and functional similarities, they have different pharmacology and spectra of activity. Antibiotics should be used only if clinical or laboratory evidence suggests a bacterial infection, Use for viral illness or undifferentiated fever is inappropriate in most cases.

Classification of antibacterial drugs according to their mechanism of action:

Generally, if the pathogen is susceptible and the patient is non-allergic, beta-lactams, General features of Beta-lactams: are the preferred drugs for most situations due to their high efficacy, bactericidal nature, and good safety profile. 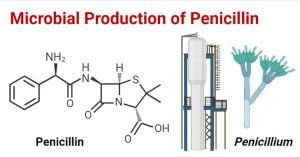 Penicillins are among the most widely effective and the least toxic drugs known, Members of this family differ from one another in the antimicrobial spectrum, stability to stomach acid, cross hypersensitivity, and susceptibility to bacterial degradative enzymes (B-lactamases).

Penicillin distributes well throughout the body, but they penetrate poorly into CSF and serous cavities, however infected serous membranes are more permeable, e.g. in meningitis, penicillin penetrates well.

All penicillin crosses the placental barrier, but none have been shown to have teratogenic effects. They are also excreted in breast milk and can be safely used during lactation.

The primary route of excretion is renal, therefore, patients with the impaired renal function must have dosage regimens adjustment according to creatinine clearance, however, for nafcillin and oxacillin, as they are primarily metabolized in the liver, dose adjustment is not required in patients with renal insufficiency.

Penicillin V is similar to penicillin G, but it is acid stable and is given orally, it is of limited use because of its poor bioavailability and frequent dosing 4-6 times per day.

These penicillins are resistant to staphylococcal beta-lactamases.

They are effective against staphylococci including those producing beta-lactamases, as well as streptococci.

They are used for infections caused by Methicillin-sensitive Staphylococcus Aureus (MSSA).

They include Ampicillin and amoxicillin. They are sensitive to beta-lactamases.

Amoxicillin is better absorbed from the gut, Its oral dose reaches approximately double the serum peak concentration of ampicillin and food does not interfere with its absorption, Because of more complete absorption of amoxicillin, the incidence of diarrhea is less than that of ampicillin.

In addition to activity against all organisms affected by standard penicillin, they have activity against non-beta lactamase-producing aerobic Gram-negative bacilli, e.g., influenzae, E.coli, and P.mirabilis, When used in higher doses or combined with beta-lactamase inhibitors, they gain broader spectrum.

They include ticarcillin and Piperacillin.

A combination of piperacillin-tazobactam is recommended for empiric therapy of hospital-acquired pneumonia, intra-abdominal infections, and septic shock.

Clavulanate sulbactam and tazobactam are beta-lactamase inhibitors that have little intrinsic antibacterial activity but inhibit the activity of a number of beta-lactamases, For example:

Penicillins are among the safest antibiotics, however, adverse reactions may occur in the form of:

1. Hypersensitivity reactions: Approximately 5% of patients have some reactions, ranging from rashes to angioedema and anaphylaxis. Cross-allergic reactions occur among the β-lactam antibiotics. There is no cross-allergenicity with monobactam.

2. Diarrhea: Diarrhea is a common problem that is caused by a disruption of the normal balance of intestinal microorganisms, Normal microflora are typically reestablished shortly after therapy is stopped, however, in some patients superinfection results, Pseudomembranous colitis, related to overgrowth and production of a toxin by Clostridium difficile, follows oral and, less commonly, parenteral administration of penicillin.

3. Neurotoxicity: Penicillins are imitating to neuronal tissue and they can provoke seizures if injected (intrathecally or if very high blood levels are reached, Epileptic patients are particularly at risk due to the ability of penicillin to Inhibit gamma amino butyric acid neurotransmission.