The inner ear is one of the special sense organs concerned mainly with hearing and maintaining the body equilibrium. The Inner ear is a fluid-filled cavity that consists of osseous and membranous labyrinths:

It consists of a series of connected irregular spaces within the petrous portion of the temporal bone, It is filled with the perilymph, It is formed of the following structures: 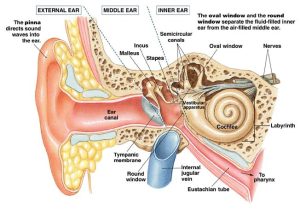 A. The utricle and sacculer

They are two membranous sacs lying inside the bony vestibule and are joined by γ-shaped endolymphatic duct. The maculae (sacculi & utriculi) are present in the saccule and utricle of the vestibule.

These are neuroepithelial thickenings in the membranes of the utricle and saccule. They are responsible for the sensation of linear movement of the head. The maculae (sacculi & utriculi) are similar in their structure and are composed of:

I. Hair cells: these are specialized neuroepithelial cells of 2 types:

II. Supporting cells: they are columnar cells disposed between the hair cells. They have few microvilli on their free surface.

B. The semicircular canals and ducts

There are three bony semicircular canals (SSCs), the lateral (horizontal), the anterior superior, and the posterior. They are arranged at planes that are perpendicular to each other. Each canal has a dilatation at its base called the ampulla. The three membranous ducts have the same general form as the bony canals assuming the same course and having the same dilatations (ampullae). Both ends of each semicircular duct open in the utricle of the vestibule.

The semicircular membranous ducts at the level of their ampullae show neuroepithelial thickenings called the cristae ampullares. Their structure is very similar to that of maculae. They are responsible for the sensation of rotation (angular acceleration) of the head. The crista ampullaris is composed of: